Get latest articles and stories on World at LatestLY. Despite the Taliban promise to provide 'general amnesty' to all including Human Rights defenders, social activists, journalists, employees of the former Afghan government and also the ones who worked for American led NATO establishments, reports coming in from Afghanistan are contrary to what was promised and present a series of horrifying instances of human rights abuses by the group. 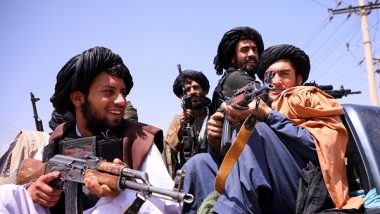 Kabul [Afghanistan], November 12 (ANI): Despite the Taliban promise to provide 'general amnesty' to all including Human Rights defenders, social activists, journalists, employees of the former Afghan government and also the ones who worked for American led NATO establishments, reports coming in from Afghanistan are contrary to what was promised and present a series of horrifying instances of human rights abuses by the group.

According to International Forum for Right and Security (IFFRAS), the Taliban continued to crackdown on journalists and tortured them for reporting about women's protests in the country, especially when female protestors took to the streets demanding equality and freedom in Nimroz, Kabul, Herat, Mazar-e-Sharif and other cities and provinces in Afghanistan.

Taliban has a long record of the harsh treatment meted out to journalists as a measure to suppress all sorts of dissenting voices, which prevailed even before they assumed national power. These include brutal forms of human rights abuses like beating, steeping on them to the extent of causing several internal injuries, torture and also assassinations.

The Reporters were threatened to not report the protest in Mazar-e-Sharif held on September 2 and 6, 2021.

Following the Taliban announcement on 3 September that it had seized control of Panjshir, where an armed group had been resisting the Taliban rule, celebratory gunfire killed at least 17 people and injured 41 others in Kabul.

Further, Mahmud, a male human rights defender, reported to Amnesty International, that he and his colleagues had faced death threats and had to relocate temporarily. Also, Mahmud shared images of how the Taliban beat one of his staff members badly. The images show classical assaultive 'whip marks' to the back, reported IFFRAS.

Nazir, another human rights defender who spoke with Amnesty International, said that he faced the risk of reprisals from the Taliban because of his work in human rights, his previous work as a journalist, and because of his ethnic and religious identity as a Shia-Hazara.

He emphasized that "journalists, activists and anti-Taliban intellectuals, writers/artists, female journalists, former police, army, and intelligence officers, as well as female athletes, judges, advocates and singers, are all at immediate risk".In another instance, a prominent civil society activist, Abdul Rahmad Mawin was gunned down in Jalalabad city in Afghanistan's eastern Nangarhar province bordering Pakistan in October amid an ongoing targeted assassination spree.

In these months, the Taliban is reportedly on a wild run to hunt down several leading Human Rights activists and eliminate them, reported IFFRAS.The Taliban have also been indulging in forcefully displacing the members of the Hazara community. Human Rights Watch (HRW) have accused the Taliban of such inhume displacement of many families across Afghanistan, which the Taliban describes as a form of "collective punishment".

It has ordered Hazaras and other residents in four provinces across Afghanistan to leave their homes and farms, in many cases with only a few days' notice.

Hazaras are a Shia ethnic minority community, who make up about make up for around 9 per cent - 10 per cent of the Afghan population. They are basically of Mongolian and Central Asian descent and reside mostly in the mountainous area of central Afghanistan, reported IFFRAS.

Taliban's hatred for the Hazaras is primarily due to their difference in sectarian identity and distinct ethnic origins, and therefore considers them to be 'infidels'.

Videos of forced displacement and ethnic cleansing of Hazaras continues in the Gizab and Patu districts of Daykundi by the Taliban. The brutal torture meted to the Hazaras, including children are beyond condemnation. Several have been killed by the Taliban in Qarabagh district of Ghazni. They have been tortured inhumanly and then shot in their faces. A picture of a Hazara child drenched in clothes wet with blood was tweeted recently, reported IFFRAS. (ANI)