Klein Vision’s Flying car called AirCar Prototype 1 achieved a key milestone after it completed a 35-minute flight from the international airport in Nitra to Bratislava on June 28, 2021. 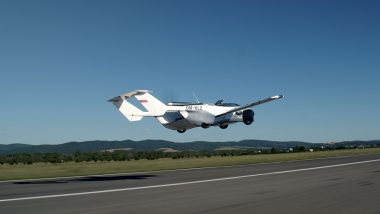 Klein Vision’s Flying car called AirCar Prototype 1 achieved a key milestone after it completed a 35-minute flight from the international airport in Nitra to Bratislava on June 28, 2021. AirCar is a flying vehicle that can change from a vehicle mode to a flying mode in a short time. Its inventor who goes by the name of Professor Stefan Klein flew the flying car and after landing, the aircraft transformed into a sports car in under three minutes with a click of a button. Kia and Apple Partnership for Electric Car Reportedly Still Possible.

The AirCar Prototype 1 is equipped with a 160hp BMW engine with a fixed propeller and a ballistic parachute. The AirCar has flown at 8200ft, reached a maximum cruising speed of 190km/hr and completed over 40 hours of test flights including 45-degree turns.

Other than the AirCar Prototype 1, there also a Prototype 2 which will be equipped with a 300hp engine and receive the EASA CS-23 aircraft certification with an M1 road permit. With the help of its variable pitch propeller, the Prototype 2 AirCar is likely to get a cruise speed of 300km/hr and a range of 1000km. According to the co-founder of Klein Vision, the flying car is no longer just a proof of concept. Flying it at 8,200ft at a speed of 100kt has turned science fiction into a reality.

(The above story first appeared on LatestLY on Jun 30, 2021 04:19 PM IST. For more news and updates on politics, world, sports, entertainment and lifestyle, log on to our website latestly.com).