Voted ‘Best Overall Vodka’ in 2020 by RaveReviews.org, Vavoom Vodka is making a mark in the highly competitive alcohol industry. Vavoom Vodka is a premium, five-times distilled spirit served in a piece of hand-crafted art. 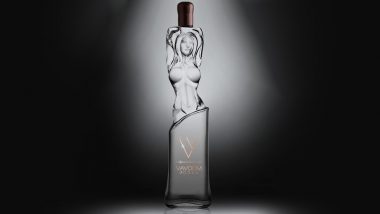 Voted ‘Best Overall Vodka’ in 2020 by RaveReviews.org, Vavoom Vodka is making a mark in the highly competitive alcohol industry. Vavoom Vodka is a premium, five-times distilled spirit served in a piece of hand-crafted art.

The founder of Vavoom Vodka, Luke Battiloro, is a successful entrepreneur and philanthropist. The idea for a vodka brand came to him while he was shopping in the liquor aisle. Even with so many options, he couldn’t find one bottle that would make a presentable and impressive gift. Battiloro was looking for something that would stand out on the shelf like art.

As a business-man, he saw an opportunity and got to work, starting with the bottle. The design had to live up to his vision, so he ended up designing it first in CAD, then to get it just right, he learned how to physically sculpt the bottle out of clay and bronze over the sculpture. When it was finally ready, Battiloro took the sculpture to Bruni Glass in Milan Italy, which is regarded as the finest glass manufacturer in the world, to capture his vision and turn it into a work of art.

To follow, Battiloro spent years crafting a vodka that would be fit for the bottle. He partnered with a man who had over 30 years of experience making vodka, and even custom-built his distilleries. With premium ingredients and a unique distilling process, Vavoom has impressed customers with delicious, gluten-free vodka. Reviews rave about the smooth taste and beautiful bottle.

This type of success does not come easily in such a cut-throat industry. Vavoom Vodka is new to the almost $30 billion alcohol industry and is undoubtedly an independent underdog that is up against privately-held equity firms that own most alcohol brands and distributors.

Battiloro knew the challenges of pursuing the traditional route through one of the major distributors and into retail stores, so he got creative with what he already knew. With a professional background in online sales, specifically CBD on a large scale, Battiloro decided to make Vavoom the first vodka to sell exclusively online.

Shortly after, COVID-19 changed the way consumers shop, including in the alcohol industry. Companies that have been around for decades were put on the spot to shift sales online when their existing websites were primarily used as an advertising billboard. Battiloro’s out-of-the-box thinking put Vavoom on the map with some of the world’s biggest alcohol brands.

With a passion for philanthropy, Battiloro made sure to incorporate a charitable component in the for-profit company. The Vavoom Fund is an incentive for customers to donate from their online shopping cart. Customers receive a 10 percent off coupon code in exchange for donating $2.00 on top of their purchase to a Vavoom partner charity.

Battiloro’s vision for Vavoom is to take even further beyond premium vodka and luxury goods. The vodka bottle, a beautiful sculpture of a woman, showcases the symbol of Vavoom’s brand-message, which is empowerment for women. Battiloro hopes that he can share this message throughout Vavoom’s entire collection and into new ideas moving forward.

Battiloro says, “I believe that physical beauty is just a compliment to the overall picture and that it is important to maximize a woman’s potential to be physically attractive, but also intellectually and emotionally intelligent.” He adds, “We started with vodka, but are branching into a line of luxury handbags, clothing, and makeup. The Stai’ Bella collection, which means, “be you, be beautiful,” will expand the brand in new empowering segments.”