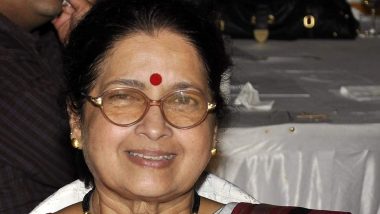 Ashalata Wabgaonkar was a noted Marathi actress. Besides acting in films, she has also acted in various plays. The veteran actress, who was undergoing treatment for COVID-19, has passed away on September 22, 2020. According to a report in Mirror, she breathed her last in Satara. It was a week ago when Ashalata Wabgaonkar had tested positive for coronavirus. It happened while she was shooting for the new show titled Aai Mazi Kalubai. Aashalata Wabgaonkar Tests Positive For Coronavirus, Marathi Actress Is Recovering.

It was not only Ashalata Wabgaonkar who had tested positive for COVID-19, but around 20 to 22 crew members had also contracted this deadly virus. It was also reported that the some of them were asymptomatic. About the veteran actress’ health, a source had revealed to the tabloid, “The test results came out around a week ago. Ashaji was critical till around three days ago. She was in hospital and put on ventilator support. Alkaji (Alka Kubal) who is her friend, co-actor and also the show’s producer, was with her. The others are recuperating well and even Ashaji is on the path to recovery.”

Ashalata Wabgaonkar was the only member from the team who was said to be in a critical condition. The world of cinema has lost another gem. She had acted in more than 100 films in Hindi and Marathi languages. We express our heartfelt condolences to her the veteran actress’ family members.

(The above story first appeared on LatestLY on Sep 22, 2020 09:58 AM IST. For more news and updates on politics, world, sports, entertainment and lifestyle, log on to our website latestly.com).