Badhaai Do: Bhumi Pednekar Reveals Why She Took the Decision to Star in the Upcoming Comedy Drama 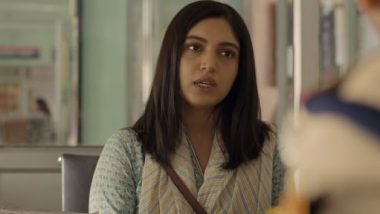 Bollywood actress Bhumi Pednekar has revealed why she took the decision to star in 'Badhaai Do'. She says her decision to do the film was based on the fact that she gets to sensitively portray a character and give voice to a subject that will be an eye-opener. Badhaai Do Title Track: Rajkummar Rao, Bhumi Pednekar’s Wedding Special Number Is Vibrant And Peppy! (Watch Video).

Bhumi said: "I'm really proud that content filmmakers, making differential and clutter-breaking subjects, feel I can helm a project that is unique and bring their vision to life. "I thrive on pushing myself constantly and my decision to do 'Badhaai Do' was based on the fact that I get to sensitively portray a character and give voice to a subject that will be an eye-opener for India." Badhaai Do: Bhumi Pednekar Opens Up About Her Upcoming Comedy Drama, Says ‘There Was a Lot of Sensitivity About the LGBTQI Community’.

The versatile actress added: "'Badhaai Do' is a hot franchise that balances commerce with content. It is really exciting to be an actor in these times because such subjects are being backed by big producers who want to create a change in society. "As a "human being, I'm drawn to subjects that can lead to a positive impact on people and be a catalyst for social good. I hope 'Badhaai Do' does just the same. I can't wait for people to watch this film because it is truly, truly endearing."

(The above story first appeared on LatestLY on Jan 29, 2022 09:31 PM IST. For more news and updates on politics, world, sports, entertainment and lifestyle, log on to our website latestly.com).