Barot House Movie Review: Amit Sadh and Manjari Fadnnis’ Zee5 Original Film Will Surprise You With Its Twists and Turns

Zee5 Original film Barot House is directed by Bugs Bhargava and stars Amit Sadh, Manjari Fadnnis and Aaryan Menghji. The movie is streaming on the OTT Platform from August 7. 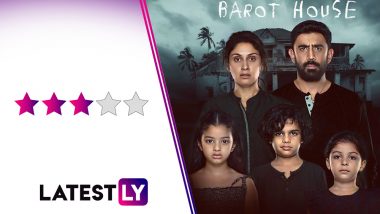 Barot House Movie Review: As the family of Barot House celebrate Janmashtami at their house in the night, one of their daughters try to get anyone to play hide-and-seek with her. Her uncle, who is horny for some action with his girlfriend, fibs to her that he will play so that he can get rid of her. The girl doesn't find a place in the house, so she goes on the street and tries to hide in a nearby cemetery. The next day, the parents find her body behind a gravestone, her head battered brutally with a stone. Manjari Fadnis and Amit Sadh Talk About Their Upcoming Thriller Barot House, A ZEE5 Original.

The needle of suspicion falls on the child's wayward uncle, a vengeful neighbour and her own father Amit (Amit Sadh). The mother Bhavana (Manjari Fadnnis), meanwhile, loses her mind on seeing her dead child. But the police really couldn't put the finger on anyone and the case goes cold. And then, a second death happens in the Barot House, as we realise this family is not the picture-perfect unit, that the first frame told us.

Barot House, a Zee5 original movie, is reportedly inspired by true events and is directed by popular voice-over artist and actor, Bugs Bhargava. In his debut attempt at making a movie, Bhargava blends in a fusion of an investigative thriller and a psychological drama. The first act deals with the investigation part and this is certainly the weakest portion of Barot House. Barot House Trailer: Amit Sadh's Zee5 Original Suspense Drama Inspired By Real Events Looks Intriguing.

While the movie does maintain the sense of suspense in these scenes, Bhargava's inexperience as a director is clearly felt here. And, also the low production values of a movie made on an OTT platform that is not Netflix or Amazon. There is a sense of theatricality in the performances, and a couple of flashback scenes feel randomly edited. I can blame this on Barot House's needless efforts to establish red herrings that don't work out always.

However, if you surpass the initial awkwardness, the rest of the film will surprise the hell out of you. Especially, when the first twist lands. I am not going to detail about what happens after that, but it is definitely a knockout turn of events. The problems that plagued the first act still persist, and certain subplots feel more like an excuse to adhere to the red-herring trope than are established properly. Like, Amit's suspicions about his wife's infidelity.

Even then, Barot House's turn into a psychological thriller has enough content to keep you on the edge of the seat. Writer Sanjeev K Jha uses his experience of penning Crime Patrol episodes to create a disturbing family drama filled with enough twists and turns. I also picked out some heavy influences of two movies in Barot House, the names of which I won't say for spoiler reasons. Though, I can clue in that one of the films starred Tilda Swinton and the other had Macaulay Culkin in the lead.

If only Barot House had gotten rid of that feel and tone of being an extended Crime Patrol episode, then this would have gone great lengths. Still, I was hooked by the happenings to the very last scene, as Bhargava, Jha and the lead actors create a thriller that, on a couple of occasions, even get under your skin.

I have to add here, though, that Barot House has the possibility of attracting the ire of mental awareness groups in the way it treats a certain character. The choice of using Daman as a setting for the plot is a refreshing change, even if you sometimes confuse the place for Goa.

The lead actors are also a saving grace in the movie. Amit Sadh is highly effective as the disturbed father trying to harbour a dark secret. On a couple of occasions, he tends to go overboard and some of his character's actions make no sense. But otherwise, Sadh keeps you engaged with a dedicated act, and as a performer, you can feel that he is going from strength to strength.

The underrated Manjari Fadnnis gets lesser scope compared to Sadh in the field, but she performs admirably as the mother, torn apart by grief. She is quite good in the scenes where she cradles the body of her first child and also when she discovers the second death.

However, the movie completely belongs to one actor and that's the young Aaryan Menghji. The child actor, who plays Bhavana and Amit's son, take you by complete surprise with a revelatory performance. This one has a lot of promise!

PS: I know the purpose was to spoon-feed the viewer, but it would have been recommended to remove the epilogue. Won't it be a cool idea to let the viewer fill in the gaps himself or herself?

Zee5's Barot House is an engaging drama that is dented by a weak first act, but gains strength when it develops into a twisted psychological thriller. Also watch out for the young Aaryan Menghji who steals the show with a very stunning performance.

(The above story first appeared on LatestLY on Aug 07, 2019 09:00 AM IST. For more news and updates on politics, world, sports, entertainment and lifestyle, log on to our website latestly.com).