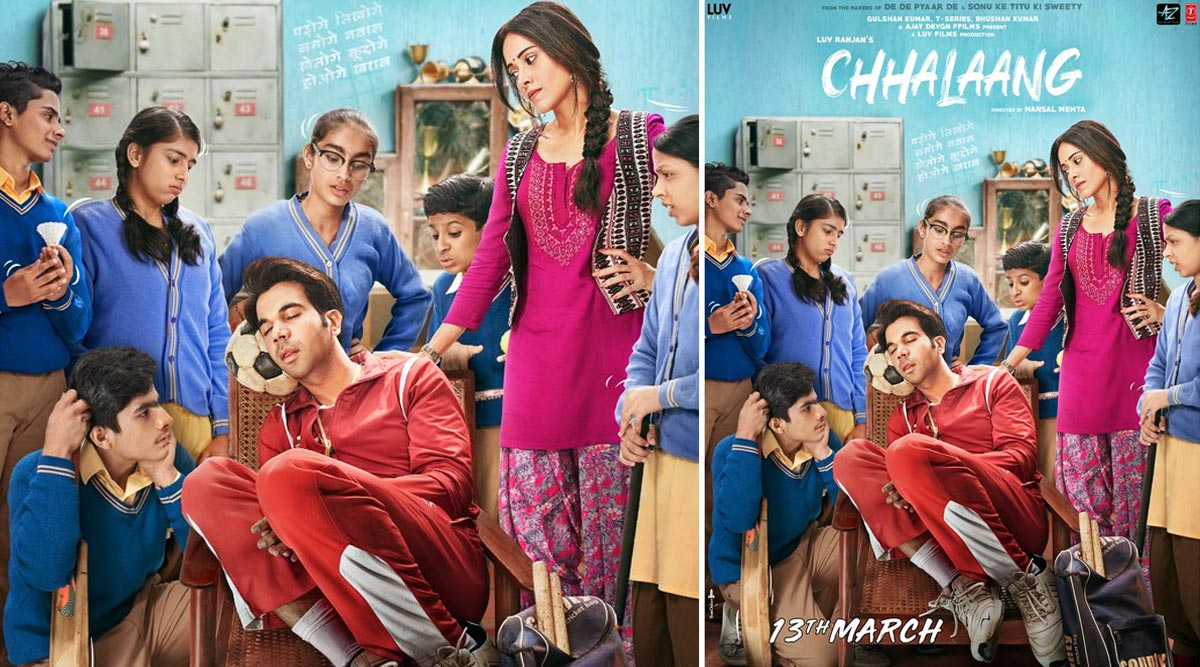 The upcoming Hansal Mehta film was titled Turram Khan, but the makers later changed it to Chhalaang. Not only the title has been changed, but the film’s release date has also been postponed. Chhalaang, which was initially scheduled to release on January 31, will now be releasing on March 13. Yes, you’ll have to wait a little longer to watch this Rajkummar Rao and Nushrat Bharucha starrer. But here is something intriguing that will pique your curiosity about Chhalaang, the first look poster. Rajkummar Rao and Nushrat Bharucha's Turram Khan Has Now Been Titled Chhalaang, Producer Ajay Devgn Shares the Announcement With a New Still.

The first look poster of Chhalaang is quirky and intriguing. One would really want to know why is Rajkummar Rao dozing off and that too during school hours. In this poster, Rajkummar is seen in deep sleep while Nushrat Bharucha and the school children are staring at him. In the backdrop you’ll see locker cupboard and ample of trophies kept in another glass cabinet. Talking about the students who have surrounded Rajkummar, one of them is seen with a cricket bat while the other is seen with a shuttlecock. The students do look puzzled seeing a sleepy physical trainer of the school. Rajkummar Rao’s Next With Nushrat Bharucha to Go on Floors Before His Film With Girlfriend Patralekha?

Chhalaang is touted to be a comedy drama set in a small town in Uttar Pradesh. This is the fifth time that Hansal Mehta and Rajkummar Rao have teamed up for a project after Shahid, CityLights, Aligarh and Omerta. Chhalaang will be produced under the banners of Ajay Devgn FFilms and Luv Films.