CONFIRMED! Luka Chuppi 2 Is Happening, Will Kartik Aaryan and Kriti Sanon Be the Lead Pair Again?

Luka Chuppi, directed by Laxman Utekar, featured Kartik Aaryan and Kriti Sanon as the lead pair. Released on March 1, 2019, this film was indeed commercially successful amongst the mid-range films released this year. 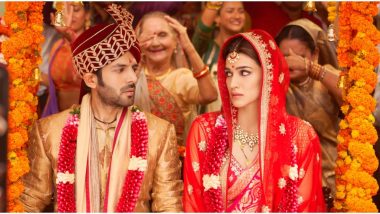 Luka Chuppi, directed by Laxman Utekar, featured Kartik Aaryan and Kriti Sanon as the lead pair. Released on March 1, 2019, this film was indeed commercially successful amongst the mid-range films released this year. The film revolved around a young couple, Guddu and Rashmi,  who delved into the idea of live-in relationship but end in a chaotic situation when their families get to know about it. But eventually they tie the knot. Looks like the makers are ready to bring some new twists and turns this time. Producer Dinesh Vijan has confirmed that Luka Chuppi 2 is happening! But will Kriti and Kartik be seen again as the lead pair? Read further to know more.

Earlier Kriti Sanon had dropped a hint about Luka Chuppi sequel. However, cinephiles were just waiting for an official word. Talking about Luka Chuppi 2 the producer told BT, “It is currently being written. The idea is to push the envelope and play around the theme — divorce sah parivar. The couple is divorced, the family doesn’t know it and the chaos that ensues because of this complex, yet funny situation... It’s a good time to think about what the trend in the content space will be like in a year or 18 months down the line. We will take roughly a year to write the film and then take matters forward.”

With regards to the idea behind such a plot and the star cast, Dinesh Vijan was further quoted saying as, “While we’ve seen many films revolving around live-in relationships, we infused the family angle in Luka Chuppi, which made it more accessible to the audience. It was treated in a way that worked well with the viewers. So, our intention is to make Luka Chuppi 2 just as accessible with a twist. We also plan to rope in the previous cast, along with new faces in the sequel.” Well, this is one of the most-awaited sequels. We just cannot wait to see who all would be featured in Luka Chuppi 2!

(The above story first appeared on LatestLY on Sep 28, 2019 08:41 AM IST. For more news and updates on politics, world, sports, entertainment and lifestyle, log on to our website latestly.com).