Aamir Khan, Mr Perfectionist of Bollywood, celebrates his 53rd birthday today. On behalf of the entire Latestly desk, we wish the pride of the industry A Very Happy Birthday! 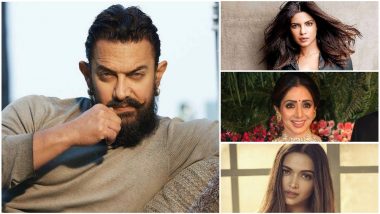 Aamir Khan, Mr Perfectionist of Bollywood, celebrates his 53rd birthday today. On behalf of the entire Latestly desk, we wish the pride of the industry A Very Happy Birthday!

There is no doubt that Aamir Khan is the real king of box office, delivering back to back box office blockbusters, while breaking all kinds of box office records. His Dangal is currently India's highest grossing movie worldwide and he has a huge pull in China too. Aamir is known for his meticulous dedication to any movie he is a part of that, and that is not just restricted to his performance. He takes deep interest in every detail of the movie's production process, so much that he has often been accused of ghost-directing movies. No wonder, he is the only actor of his generation to have an Oscar nom in his kitty (Lagaan for the Best Film in a Foreign Language).

Like his movies, Aamir is also very choosy about his co-stars. In the present generation of actresses, he has worked with Kareena Kapoor, Katrina Kaif, Anushka Sharma. But he is so choosy that some actresses, who were reigning box office divas, didn't get the opportunity to romance him in a movie.  While there makes little sense of including younger generation of actresses like Alia Bhatt, Shraddha Kapoor, Kriti Sanon in the list, it comes more of a jolt when you realise Aamir hasn't worked with any of the below actresses in a movie properly.

Bollywood's beloved actress, who passed away last month, was the reigning queen of the industry in '80s and the '90s. She had worked with Salman Khan (Chandramukhi), Shah Rukh Khan (Army), Sanjay Dutt (Gumrah) and even Akshay Kumar (Meri Biwi Ka Jawab Nahi). But for some reason, she hasn't worked with Aamir Khan though they did a photoshoot together.

Apart from that nostalgic Pepsi ad (also featuring Mahima Chaudhary), no one bothered to cast Aamir Khan and Aishwarya Rai Bachchan in a movie. Yes, Aishwarya had a cameo in Mela, but she was brought in for Aamir Khan's younger brother, Faisal to have a jodi and technically, Ash and Aamir didn't get to share a frame. Well, there is still time to rectify that!

Kareena Kapoor did not one but two movies with Aamir (3 idiots, Talaash) but her close rival and Aitraaz co-star Priyanka Chopra has failed to make Aamir her co-star. They did come close when Aamir was supposed to do the Rakesh Kumar biopic and Priyanka was in talks to play his wife. But after the actor backed out of the project, even the former Miss World lost interest in the movie. That said, Aamir did voice a dog in Priyanka Chopra's Dil Dhadakne Do!

Deepika Padukone may have worked with Shah Rukh Khan a number of times, but she has yet to worked with Salman Khan, Hrithik Roshan and even Aamir Khan, despite being at the top of the rankings. Maybe it's time she should give her pairing with Ranveer Singh a break. Off screen, of course!

The National award-winning actress often been referred to as the female Aamir Khan, but she has never got the chance to work with the actor. Save for that montage song in Bombay Talkies!

Aamir Khan is currently working in Thugs of Hindostan, that also stars Amitabh Bachchan, Katrina Kaif and Fatima Sana Shaikh. Directed by Victor and produced by YRF, the movie is Bollywood's costliest flick of 2018 and is scheduled to release during Diwali.

(The above story first appeared on LatestLY on Mar 14, 2018 02:24 PM IST. For more news and updates on politics, world, sports, entertainment and lifestyle, log on to our website latestly.com).