Singer-composer Himesh Reshammiya has recalled the time when the late Kishore Kumar wanted to re-record a song, inspired by the nuances rendered by Lata Mangeshkar as the female voice. The two playback legends were recording for Himesh's father Vipin Reshammiya. 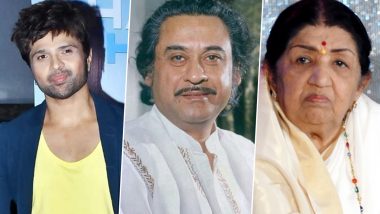 "My father Mr. Vipin Reshammiya recorded a song which was for both male and female voice. The female voice was sung by the legend Lata Mangeshkar ji and Kishore Kumar, who had already recorded it once. But after listening to Lata ji's version he wanted to sing that song again as he also wanted to achieve those nanoscopic details in his singing," Himesh said. Singer Shaan Recalls Moment of His Father Manas Mukherjee Working With Kishore Kumar.

He said the song couldn't be released, but added that he still has the melody and would release it soon. Himesh was speaking while judging the music reality show "Indian Idol 12" on Sony Entertainment Television.

(The above story first appeared on LatestLY on May 05, 2021 04:18 PM IST. For more news and updates on politics, world, sports, entertainment and lifestyle, log on to our website latestly.com).