Janhvi Kapoor Spends Her Sunday Doing Kathak Rehearsals, Khushi Kapoor’s Reaction to It Is Every Sister in the World! (Watch Video)

Janhvi posted a video of her performing classical Kathak dance. Clad in a lemon-coloured kurta, the actress is seen rehearsing on the song "Kanha" from Shubh Mangal Saavdhan. The video shows her perfectly acing the steps. 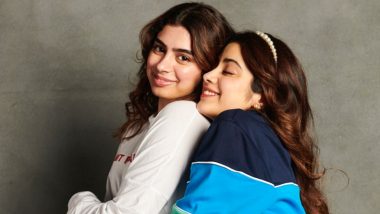 Janhvi Kapoor is one of the wittiest celebrities on social media. Her posts on Instagram are always amusing and the actress often impresses us with her funny captions. Whether it is her spending some quality time with her family or one of her gorgeous shoots, Janhvi likes to keep her fans updated with everything she does. Apart from her love for food and travel, we also can easily figure out that the Dhadak actress loves to dance. We have often seen her post videos of her grooving on an old melody. The actress is an amazing dancer and her latest video is just the perfect Sunday post that her fans need. Janhvi Kapoor Workout and Diet: This Is How Young Bollywood Actress Keeps Her Body Incredibly Fit.

Janhvi posted a video of her performing classical Kathak dance. Clad in a lemon-coloured kurta, the actress is seen rehearsing on the song "Kanha" from Shubh Mangal Saavdhan. While the first video shows her perfectly acing the steps, Janhvi went on to share a blooper video as well. In the other video, she messes up a step and gives a cute reaction that will put a smile on your face.

Seeing Janhvi dance is always mesmerising but this time it was her little sister who stole the limelight. Khushi Kapoor is seen sitting in the background while she is busy on her phone. She is least bothered with what Janhvi is doing and it is honestly is relatable if you have a sister. Janhvi in her caption mentioned the same and said, "Hope you guys are more amused than my sister was."

Check Out Her Video Here:

On the work front, Janhvi will be next seen in Dostana 2 alongside Kartik Aaryan and Lakshya in the lead roles. She also has Karan Johar’s shelved period drama Takht in her kitty. The film also stars Kareena Kapoor Khan, Ranveer Singh, Anil Kapoor, Vicky Kaushal and Bhumi Pednekar in pivotal roles. Janhvi Kapoor Says Her Crush On Dear Comrade Star Vijay Devarakonda is 'One-Sided'.

She is also a part of Roohi Afzana. The film was supposed to release on June 5, 2020, but now director Hardik Mehta is reportedly planning for an OTT release for the film. If the film happens to release on an OTT platform, this will Janhvi's third project releasing on a digital platform after Ghost Stories and Gunjan Saxena: The Kargil Girl.

(The above story first appeared on LatestLY on Dec 06, 2020 02:47 PM IST. For more news and updates on politics, world, sports, entertainment and lifestyle, log on to our website latestly.com).