Janhvi Kapoor Workout and Diet: This Is How Young Bollywood Actress Keeps Her Body Incredibly Fit

Janhvi Kapoor has won the hearts of many people right from the time she made her debut in Bollywood with the movie Dhadak. The gorgeous B-town actress has a perfectly well-defined slim body. Janhvi is highly fitness conscious and is addicted to workout 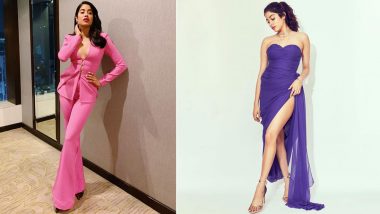 Janhvi Kapoor has won the hearts of many people right from the time she made her debut in Bollywood with the movie Dhadak in 2018. The gorgeous B-town actress and daughter of late actress Sridevi boasts of a charming personality. She has a warm smile, great style and to top it all a supremely sculpted body. Janhvi is highly fitness conscious and is addicted to workout (Remember, all those GYM LOOKS). The amount of time she puts in the gym clearly reflects on her figure. In the below article, we will throw light on Janhvi Kapoor workout and diet, that helps her main slim body. Fashion Faceoff! Janhvi Kapoor and Mouni Roy Raise Temperatures in Red Hot Sarees But Who Impressed You More?

Janhvi Kapoor was born on March 6, 1997, in Mumbai to eminent Bollywood personalities, film producer Boney Kapoor and superstar actress Sridevi. Before stepping into Bollywood, Janhvi made sure that she works on her look, body and acting skills to look the best on-screen. Acting is present in her genes, after all, she is the daughter of Sridevi. Speaking about her fitness, Janhvi Kapoor has been working out for years and she seems to not get enough of her gym sessions. Janhvi Kapoor is Exuding all the 'Desi Girl Vibes' in this Simple and Stunning Arpita Mehta Creation (View Pics)

Janhvi Kapoor currently is a lot into pilates training and doing it under the guidance of famous celebrity trainer Namrata Purohit. Pilates has helped Janhvi achieved a well-toned body. The Dhadak actress can be seen training her core, glutes and hamstrings on the pilates reformer machine. Apart from this Janhvi also does weight training and a bit of conditioning. In the gym also, she concentrates on lower body exercises and performs exercises like barbell glute bridge, squat to name a few.

Janhvi Working on Her Abductor Machine

Fluid movement with @janhvikapoor 🥰 one of our favourite series! 💪🏼🔥 Our glutes are on fire! Haha #MondayMotivation #MondayMood #PilatesGirls

Janhvi Busy Toning Up Her Hamstrings

As per TOI, Janhvi Kapoor is not very strict about her diet, she believes in healthy eating, which should be enough to fulfil all the nutritional requirement. However, she sticks to homemade food and avoids outside junk food. The actress always carries tiffin to her shoot, which usually includes brown rice, legumes, chicken sandwich and salads. The key secret of her fitness is that she has her dinner three hours before going to bed consisting of boiled veggies or grilled fish or dal.

On the professional front, Janhvi Kapoor was recently seen in a Netflix original movie Ghost Stories. She will soon be seen on screen in a biopic Gunjan Saxena that is produced by Karan Johar. Later this year she will also be seen opposite Ajay Devgn in Maidaan.

(The above story first appeared on LatestLY on Mar 14, 2020 03:51 PM IST. For more news and updates on politics, world, sports, entertainment and lifestyle, log on to our website latestly.com).