Maharashtra CM has denied any possibility of transferring the case to Bihar police by saying the officials in Mumbai are competent enough. 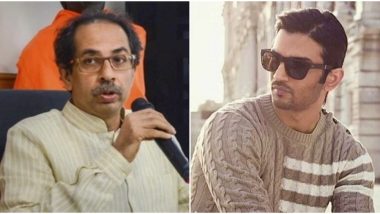 Sushant Singh Rajput's death probe is getting murkier by day and the recent FIR filing by his father against Rhea Chakraborty has intensified the matter further. While the actor's ex-girlfriend, Ankita Lokhande has strongly denied him being a victim of depression, she insists that Rhea should have been by his side and informed his family about his mental health condition. Amidst the same chaos and discussion, there has been a demand to transfer the investigation to Bihar police (considering the FIR was filed in Patna). However, Mumbai Police is unwilling to make it happen and now, CM, Uddhav Thackeray has reacted to the same. Sushant Singh Rajput Death Case: Maharashtra Police Just Doing Formality, Says Actor’s Relative and BJP MLA Niraj Kumar Singh Babloo.

As per new reports in Hindustan Times, Maharashtra CM has denied any possibility of transferring the case to Bihar police by saying the officials in here are competent enough. He further stated that a transfer would be an insult to Mumbai police officers as they have been fighting the Covid-19 pandemic like warriors. He further believes that the issue shouldn't be politicised. “I would like to tell Sushant Singh Rajput’s fans that they should trust Mumbai police and pass on whatever information you have (about the case) to them,” he said. Ankita Lokhande Confirms Sushant Singh Rajput Rejected Sanjay Leela Bhansali's Movies.

Uddhav Thackeray further took a dig at former Chief Minister and leader of the opposition in the legislative assembly, Devendra Fadnavis by questioning how he can doubt the ability of Mumbai Police despite serving as a CM for five years. Meanwhile, leaders like Subramanian Swamy are adamant on demanding a CBI enquiry into his death investigation.

(The above story first appeared on LatestLY on Jul 31, 2020 11:16 PM IST. For more news and updates on politics, world, sports, entertainment and lifestyle, log on to our website latestly.com).