The actress in her new interaction has confirmed the reports of rejecting Sanjay Leela Bhansali movie along with Sushant Singh Rajput. 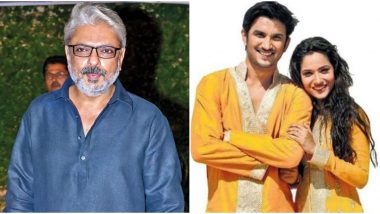 Many prominent B-town names including Sanjay Leela Bhansali, YRF head-honcho, Aditya Chopra and Mahesh Bhatt were summoned by Mumbai Police in regard to Sushant Singh Rajput's suicide investigation. They were then trying to probe his professional rivalry angle but if his ex-girlfriend and actress Ankita Lokhande is to believe, there was no animosity shared between the actor and those filmmakers. The actress in her recent interaction with Times Now has confirmed the reports of Sushant rejecting Bhansali's movie offers for reasons best known to him. Sushant Singh Rajput Never Texted Ankita Lokhande About His Relationship with Rhea Chakraborty.

Confirming the reports of Sanjay Leela Bhansali approaching Sushant for his projects, Ankita said, "Sanjay sir offered Sushant and me many films, he offered Sushant many films. I didn't do them because of my own personal reasons and Sushant didn't do it because of his reasons, but Sanjay sir was someone who believed in us, in our talent. We were the stupid ones who didn't do it. I can say this because I was there. At the time when I was with Sushant, Sanjay sir offered him a film, he didn't do it." Apparently, the director had offered him four films but the actor had his professional commitments and hence he didn't sign any. Sushant Singh Rajput Case: Bihar Police Records Statement of Late Actor’s Ex Ankita Lokhande at Her Mumbai Residence.

Ankita had also mentioned about how she's unwilling to believe that he was a depressed soul. The Sushant that she knew was always full of life and he would never take such a drastic step. His suicide investigation is meanwhile underway with Bihar Police working in sync with the Mumbai Police.

(The above story first appeared on LatestLY on Jul 31, 2020 06:20 PM IST. For more news and updates on politics, world, sports, entertainment and lifestyle, log on to our website latestly.com).