Radhika Madan Has Always Addressed Irrfan Khan As Papa or Dad, Here’s Why 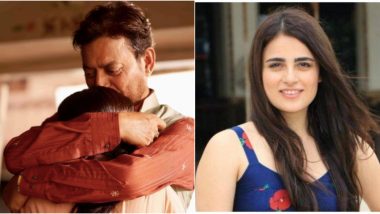 It has been over three months that Irrfan Khan passed away. Radhika, who co-starred with the late actor in his last release, has an interesting anecdote as she recalls working with him. Radhika Madan opened up on the bond she shared with Irrfan on the sets of their film, "Angrezi Medium", and shared how she used to call him "papa" or "dad". In the film, Irrfan played Radhika's father. Irrfan Khan’s Son Babil Shares His Ordeal on Facing Discrimination Due to His Religion (View Posts)

"I never addressed him as sir, I always addressed him as 'papa' or 'dad'! He would just smile. I remember when I first met him and I called him 'dad', instead of feeling weird about it, he gave me a big hug. I will always remember him as 'dad'," Radhika said, while speaking to IANS. Irrfan Khan Features in The Academy’s Video On Celebration of Hope With Iconic Film Moments and Fans Can’t Hold Back Their Tears

"I feel so grateful that I got the opportunity to just stand in front of him and share screen space. I learnt so many things from him as an actor and as a person. Working with him was a big tick on my wish list," she said. Irrfan breathed his last in Mumbai on April 29 after battling colon infection.

(The above story first appeared on LatestLY on Aug 02, 2020 01:14 PM IST. For more news and updates on politics, world, sports, entertainment and lifestyle, log on to our website latestly.com).