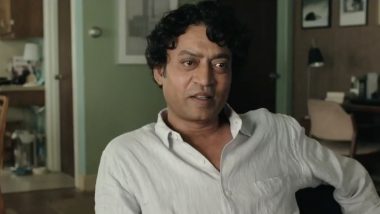 Movies are but the great escape for many as the larger than life stories on celluloid make us dream and give us hope about something bigger and better than our mundane lives. Given the current time, with the pandemic panic taking over films and the visual medium, in general, has become that one thing we rely on to release our stress. Films build hope recently, The Academy Of Motion Picture Arts and Sciences compiled a beautiful video consisting of some of the best scenes from iconic films. The video released as a celebration of films showcases moments from films such as Her, Interstellar, Captain Marvel, Parasite, Black Panther and many more. Although one of the biggest highlights of the video happened to be its ending with a beautiful clip of Irrfan Khan's scene from Life Of Pi. Irrfan Khan’s Son Babil Shares Rare Pics of the Late Actor, Pens a Hard-Hitting Note Defining the Ills of Bollywood.

The video shared by The Academy's Twitter account was captioned as, "A celebration of hope—through the lens of movies we love." The montage took us on a short journey with clips from iconic films such as The Shawshank Redemption, The Martian and more. While all the film clips connected to the beautiful theme of hope and coming to the other side of the crisis we are facing today, the last clip with a smiling Irrfan Khan saying, "Well that’s up to you" just left everyone emotional. The uber-talented actor passed away on April 29 after battling cancer for over two years. This moment from the Academy video left everyone teary-eyed. Here are some reactions to the same. Irrfan Khan’s Son Babil Shares a Heavenly Toon In His Father’s Memory and It’ll Surely Make You Smile.

Check Out The Academy's Video Here:

A celebration of hope—through the lens of movies we love. pic.twitter.com/EYZ5FPvHdl

Cinema Will Never Be the Same Without Irrfan Khan:

Pride of our Nation, #Irrfan ❤ your departure created a huge vacuum in the 💔heart.. Cinema will never be the same as it was before. We will cherish your stories your legacy. LEGEND pic.twitter.com/nQstHNGAze

Man I love him and I miss him! #IrrfanKhan

Irrfan Khan became an internationally loved actor thanks to his performances in films such as The Life Of Pi, The Namesake, A Mighty Heart among others. The actor is certainly going to be dearly missed and it's amazing to see how his legacy is being celebrated.

(The above story first appeared on LatestLY on Jul 30, 2020 10:50 AM IST. For more news and updates on politics, world, sports, entertainment and lifestyle, log on to our website latestly.com).