Mumbai-based rapper DIVINE, whose life partially inspired the Bollywood hit "Gully Boy" earlier this year, has been signed up by Mass Appeal Records, the label co-founded by American rap superstar Nas. Divine is currently working on his debut album, "Kohinoor", which is set to be released later this year. 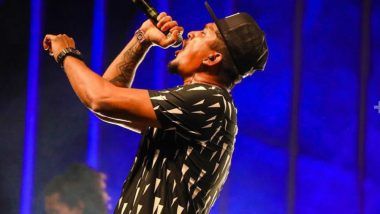 Mumbai, August 21: Mumbai-based rapper DIVINE, whose life partially inspired the Bollywood hit "Gully Boy" earlier this year, has been signed up by Mass Appeal Records, the label co-founded by American rap superstar Nas. Divine is currently working on his debut album, "Kohinoor", which is set to be released later this year.

Nas' Mass Appeal, an urban culture-focused entertainment company, along with Universal Music Group, on Tuesday announced the launch of Mass Appeal India -- a new label dedicated to amplifying India's burgeoning hip-hop culture on a global scale. Signing up DIVINE is part of Mass Appeal's initiative to foray this country. Nach Baliye 9: Rappers Naezy and Divine Roped In To Create A Special Rap for the Show?

"It's an honour to be associated with a legend like Nas. I grew up listening to his music. For him to recognise not just me, but the whole Indian hip-hop scene is a big win for hip-hop, and for hip-hop in India," DIVINE said.

"He is looking forward to working not just with me, but a lot of the young talent in India. I will be working with Mass Appeal India not just in a personal capacity, but also in my capacity as founder of Gully Gang Entertainment to help Mass Appeal India build a thriving ecosystem for urban music and culture in the sub-continent. So, let's bring our A-Game because the world is watching," DIVINE added.

Nas was first introduced to DIVINE's music through the "brilliant film 'Gully Boy'". "I'm proud to announce the launch of Mass Appeal India with DIVINE as the first artist on our roster. Hip-hop is the world's most influential culture - it's only right to share what we do at Mass Appeal on a global level," he added.

Mass Appeal India's operations will be based in Mumbai, within Universal Music India's (UMI) headquarters and will function as a multi-channel partnership between the two companies.

Devraj Sanyal, MD and CEO of UMG, India and South Asia, said: "Over the past few years UMI has concentrated on creating a culture of artist-first, non-film music to satisfy India's rapidly evolving music audience. Hip-hop has been a key area of this focus and we have found the natural partner in Mass Appeal, Nas and Peter to help realise our dream of breaking Indian hip-hop in the region, as well as to the rest of the world together."

Peter Bittenbender, CEO of Mass Appeal, added: "Coming off what has been a landmark year for Mass Appeal, we are beyond thrilled to announce the global expansion of our brand in partnership with UMI and with DIVINE as our first superstar talent signing."

(The above story first appeared on LatestLY on Aug 21, 2019 10:13 AM IST. For more news and updates on politics, world, sports, entertainment and lifestyle, log on to our website latestly.com).