Shabana Azmi Birthday Special: 5 Social Causes Supported By The Actress That Prove She Strongly Believes In Giving Back To The Society 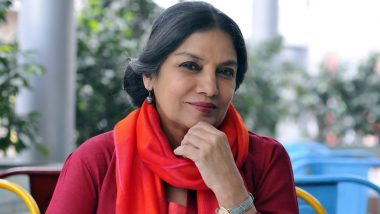 Shabana Azmi is one of the brilliant actresses that Indian Cinema has been lucky to be blessed with. The movies she did in her prime mostly spoke about a social cause, or a reality or were highly content-driven. But what many aren't really aware of is the veteran actress has been heavily inclined towards social causes for a long time now. You all must be familiar about the Mijwaan Welfare Society - Girl Child Empowerment. Many Bollywood celebrities have walked the ramp to raise funds for this cause. To help you remember, Ranbir Kapoor and Deepika Padukone too had shown off their collections at the ramp show to raise funds for the girl child welfare. This society was established by Azmi's father, the renowned poet Kaifi Azmi, in 1993. But something for Shabana Azmi changed after Arth. Shabana Azmi on Jaya Bachchan’s Parliament Speech: It Was a Much-Needed Statement, Kudos to Her!

Speaking with Asia Society, Azmi had reminisced, "When we were screening the film for possible distributors, everyone said it was a wonderful film but it would not run a day unless we changed the end because an Indian woman rejecting her husband after he has apologized is completely unacceptable. Mahesh Bhatt and I dug our heels in and said that this was precisely why we were making this film and we were going to stick with the ending. It came as a huge surprise to us that the film became a very big success. Apart from winning me the National Award, it also became in a sense a cult film. Suddenly I had women walk into my house expecting me to resolve all their marital problems. They were no longer reacting to me as fans to a star, but as a sister, as a woman."

So on her birthday, we would like to honour the social activist Shabana Azmi by telling you about a few of the causes that she has campaigned for.

Back when Doordarshan was a big deal, Azmi was seen in a Government supported PSA to spread awareness about busting stigmas related to AIDS. The video had her holding a baby suffering from AIDS is still fresh in our minds.

Azmi has been very vocal about her angst towards communalism. In 1989, she participated in a four-day march from New Delhi to Meerut to spread harmony along with Swami Agnivesh and Asghar Ali. She heavily criticised the 1992 Mumbai riots and after September 11, 2001 attacks, she opposed Grand Mufti of Jama Masjid's call asking Muslims to join Afghanistan's fight. She retorted that the leader should go there alone. She was bestowed with Rajiv Gandhi Award For Excellence In Secularism in 1994.

She worked for Nivara Haq, an organisation that worked towards giving people a right to property. In an interview, she had said, "In 1986 we went on a hunger strike after a big slum was demolished and the government was not giving its former tenants any alternative land, which they were entitled to under the policy. It was a five-day hunger strike, and ultimately we forced the government to give them the land." In 2013, she stood in solidarity with the slum dwellers of Geeta Nagar when the armed forces decided to build a wall around a slum colony.

Shabana Azmi has been working for the upliftment of women for many years now. She has spoken up about domestic violence, gender equality, female infanticide and much more. Check out one of her videos on female infanticide.

Last but not the least is, Azmi has continued her father's vision of making a girl child educated and evade the curse of child-marriage and early pregnancy. He helped scores of girls in his village Mijwaan with his resolve and now his daughter is taking it forward. That fashion show that you watch is more than just glitz and glamour. The proceeds help these kids get a better future.

(The above story first appeared on LatestLY on Sep 18, 2020 08:10 AM IST. For more news and updates on politics, world, sports, entertainment and lifestyle, log on to our website latestly.com).