Shakuntala Devi Movie Review: Vidya Balan Rocks as the ‘Human Computer’ in This Heartwarming Tale of Feminism, Motherhood and, of Course, Maths! 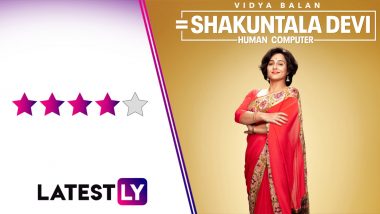 Shakuntala Devi Movie Review: Shakuntala Devi was an enigma. Even scientists and psychologists couldn't figure out how she managed to solve complex mathematical equations faster than the computer, despite no formal schooling. Anu Menon's biopic on the late maths wiz dubbed the 'Human Computer', doesn't try to break the mysticism around her ability and intelligence. Instead, it is happy being an entertaining, engrossing and moving tale of how Maths empowered a woman to fight against the conventions of the society. Also, Vidya Balan is pretty awesome in the titular role. Shakuntala Devi Song Paheli: Vidya Balan and Sanya Malhotra Portray Bittersweet Mother-Daughter Relationship Beautifully (Watch Video).

The premise of Shakuntala Devi the biopic is divided in two parts. The first part showcases how in 1934, a little girl from a Kannada Brahmin family near Bangalore is discovered to show amazing mathematical skills, and how her father uses them to arrange touring shows to earn money. The Hindi that the characters speak in these portions felt jarring in context (couldn't have them speak Kannada with added subtitles?). But I am someone who had grown up watching dubbed version of Roja, where Madhoo talks to the PM in Hindi, and the latter still needs translation to understand what she said. So that's forgivable, I guess...

Anyway, we learn that it is not just Maths that happens to be little Shakuntala's strength; she also possess enough sassiness. When her mother asks lil Shakuntala to obey her father, she reminds her that it is she who earns money for her family, and therefore she is the 'father'. Ten points for that burn!

Watch the Trailer of Shakuntala Devi:

Later, we see how a young Shakuntala (Vidya Balan) is estranged from her family, and her life in London where her mathematical genius earns her fame and money. Even though Maths has been her friend, the men in her aren't so much. From her first deceitful boyfriend in Karnataka to her Spanish mentor in England, Javier (Luca Calvani) who ditches her when she becomes very popular, Shakuntala's love life isn't as easy as the way she solves square root problems. Which also applies to her marriage to a Bengali gentleman Paritosh Banerji (Jisshu Sengupta), that breaks up over their baby daughter, in the discussion of who should be at home. The three stitches from her delivery gives Shakuntala the upperhand in the debate.

The second part of the biopic is about Shakuntala's turbulent relationship with her daughter Anupama (Sanya Malhotra). The movie takes a non-linear narrative as it chronicles their lukewarm equation during Anupama's teenage years, and their icy vibes when Anupama is married to her husband Ajay (Amit Sadh).

Looking at both the parts together, I loved the second aspect more. It's not that the first part wasn't bad - it was really fun to see Vidya Balan own the screen and enjoying the role, embracing the showy spirit of her muse. Anu Menon's light-hearted treatment makes a dreary subject like Maths looks so fun. At least it made me able to see the subject in a different light for once, when Shakuntala tells Javie (with J-Silent) that the numbers aren't as confusing as alphabets. Despite my love for the written word, I agreed with her there.

What made me love the second part more, is that Shakuntala Devi takes a different path when it comes to usual Bollywood biopics. While it does glamorise its subject, the movie also doesn't squirm away from showing the dicey portions of Shakuntala Devi's personal life.

Her ultra-possessive nature when it comes to her daughter, that later drives a wedge between them, humanises the 'Human Computer'. In trying to not let her daughter be a 'tree' by making her stick to one place, Shakuntala Devi doesn't give Anupama the life she wants, a parenthood she craves for, making the same mistake that her parents did to her.

In between, Anu Menon also takes a sojourn to Shakuntala Devi's pioneering work in helping homosexuality get decriminalised. Here's where things get dicier. It is claimed that she has taken up the cause because her ex-husband was gay, but in the movie, Anupama accuses her of making the lie. It isn't very clear as to what's the truth, and why Shakuntala tells Anupama that her father doesn't want to meet her for 10 years.

Maybe Menon wants to focus more on the mother-daughter relationship, and other aspects like how both their ordeals are linked to the fact that they each were let down by their mothers. Only for their daughters to make them realise motherhood isn't easy. And it is even difficult is to be a free-spirited genius in a society that wants you to tie up to patriarchal values.

So yes, I did wish the biopic could have covered Shakuntala Devi's drive to decriminalise homosexuality, which could have been a bold step. Instead of being just a footnote. But at the same time, I also loved how the film explored the relationship angle, especially in the third act. Just like how Shakuntala Devi tells Javier, we Indians are suckers for Drama, ain't we? So few points more to Menon, and her writers Nayanika Mahtani and Ishita Moitra (dialogues).

At the other side, Sanya Malhotra puts up a strong act against her more experienced co-star, scoring well in the dramatic portions. Amit Sadh and Jisshu Sengupta do well in their supporting parts.

- A Couple of Aspects Breezed Over

(The above story first appeared on LatestLY on Jul 30, 2020 11:50 PM IST. For more news and updates on politics, world, sports, entertainment and lifestyle, log on to our website latestly.com).