Sidharth Malhotra Continues Shershaah Shoot in Kargil, Despite Getting Injured of a Bike Accident 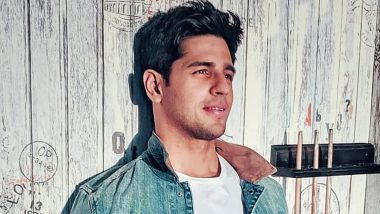 Actor Sidharth Malhotra has met with an accident in Kargil, but has assured that he should be better in a few days. The accident took place after he had wrapped up shooting for Shershaah for the day. Sidharth was riding a bike on the hilly terrain on Saturday when the mishap happened. He continued shooting despite his injury. Shershaah: Sidharth Malhotra and Crew To Shoot a Month Long War Sequence in Jammu and Kashmir.

"There was a danger of some infection because we fell on the road. The injury will take at-least a week plus to heal, however, given the schedule and scale of the film, I didn't have that time to recover," Sidharth said. "Accidents like these do happen and cause a bit of a lapse in the schedule, but I think it could have been much worse. Hopefully, in the next few days, I will be absolutely fine," he added. Sidharth also opened up about the challenges of shooting in Kargil. Shershaah: Sidharth Malhotra to Romance Kiara Advani in a Film Based on Kargil Martyr Captain Vikram Batra.

"Shooting in Kargil is a completely new experience because not many films have been shot here. We have explored virgin locations as we want to be extremely authentic when it comes to Kargil war," he said, adding: "We have shot in mountains similar to the ones where the battles were fought.

The rocks were extremely sharp, and they can't be controlled. So there were ample challenges than came in for safety while doing the action, and the team did everything to ensure that we are sage.

(The above story first appeared on LatestLY on Sep 17, 2019 06:57 PM IST. For more news and updates on politics, world, sports, entertainment and lifestyle, log on to our website latestly.com).