The action is part of a tax evasion probe against Phantom Films, which was dissolved in 2018, and its then promoters Kashyap, director-producer Vikramaditya Motwane, producer Vikas Bahl. 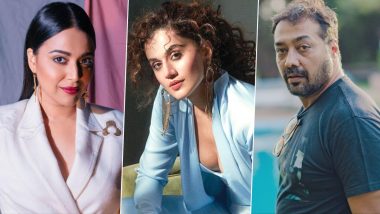 In a shocking turn of events, Taapsee Pannu and Anurag Kashyap's properties in Mumbai were searched by Income Tax officials on Wednesday in a tax evasion case. The two had to fly down to Pune for interrogation while 22 other locations in Mumbai and several other places, including the premises of the Phantom Films were also searched in the tax evasion case. Anurag's ex-partner Vikas Bahl's properties were also searched in the same case. Anurag Kashyap and Taapsee Pannu’s Properties Being Investigated by Income Tax Department; IT Raids Underway.

While no other details about the probe have been shared, Swara Bhasker took to Twitter to share 'Appreciation Tweets' for both Taapsee and Anurag. Tweeting about Taapsee, the actress commended her courage and conviction and asked her to stay strong. She did not mention the IT raids in her posts. Talking about Anurag, Swara called him 'cinematic trailblazer, a teacher and mentor of talent' and sent him more power during these tough times. Anubhav Sinha also dropped a supportive message for the two.

Appreciation tweet for @taapsee who is an amazing girl with courage and conviction that is rare to see now days.. Stand strong warrior! ❤️

Appreciation tweet for @anuragkashyap72 who has been a cinematic trailblazer, a teacher and mentor of talent and a man

With rare candour and a brave heart ! More power to you Anurag ❤️

Officials of the I-T department remained tightlipped on the searches at the premises of Phantom Films. According to another I-T department official, the searches are going on at the premises of these Bollywood personalities in connection with some "tax evasion" matter. The action is part of a tax evasion probe against Phantom Films, which was dissolved in 2018, and its then promoters Kashyap, director-producer Vikramaditya Motwane, producer Vikas Bahl and producer-distributor Madhu Mantena, added the source. Taapsee Pannu’s Film With Anurag Kashyap, A Futuristic Thriller, To Go On Floors In February?

Some executives of celebrity and talent management company KWAN are also being raided. Sources said some inter-linked transactions between the entities searched are under the scanner of the department and the raids are aimed at gathering more evidence to further probe tax evasion allegations. Meanwhile, the Manmarziyaan duo will be reuniting for Dobaaraa.

(The above story first appeared on LatestLY on Mar 04, 2021 01:11 PM IST. For more news and updates on politics, world, sports, entertainment and lifestyle, log on to our website latestly.com).