Taapsee Pannu’s Film With Anurag Kashyap, A Futuristic Thriller, To Go On Floors In February?

Taapsee Pannu has a few intriguing projects lined-up and one among them is a film with Anurag Kashyap that is touted to be a futuristic thriller. 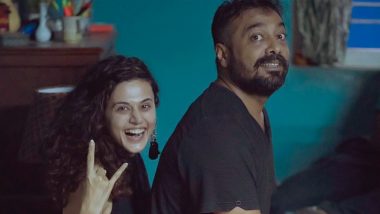 Taapsee Pannu has a few intriguing projects lined-up and one among them is a film with Anurag Kashyap that is touted to be a futuristic thriller. Taapsee and Anurag have worked together in the past. One was for the romantic drama titled Manmarziyaan that was helmed by Anurag and the actress’ film Saand Ki Aankh was bankrolled by him. The duo is all set to team up once again and this time it is a sci-fi movie. Rashmi Rocket: Taapsee Pannu Heads To Bhuj For The Sports Drama’s Last Schedule.

A source revealed to Mid-Day that this project is set to go on floors in February in Goa. Talking about the shoot schedule, the source was quoted as saying, “The futuristic thriller needed an oceanic backdrop. On learning that Taapsee will be in Goa in February, Anurag instructed his production team to quickly conduct a recce and zero in on key locations there that can suit the narrative. He has planned a three-week schedule, followed by another stint in Mumbai in the second half of March.”

The makers have not issued any official statement on this yet. Besides this project, the other films that Taapsee Pannu has in her kitty include Haseen Dillruba, Rashmi Rocket and Looop Lapeta.

(The above story first appeared on LatestLY on Jan 20, 2021 09:00 AM IST. For more news and updates on politics, world, sports, entertainment and lifestyle, log on to our website latestly.com).