The Baaghi 2 co-stars turned B-town's much-loved couple often fall prey to the curious questions of the fans. They often try to dodge the questions asked to them about their relationship. Yet again, Tiger was asked and look how he tackled the question this time! 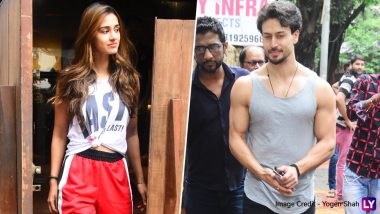 Tiger Shroff and Disha Patani's dating stories are never ending. The couple has truly confused the fans with their current status although it is an open secret that they indeed have reconciled. However, both the stars are quite keen on playing around the topic, especially while answering the questions about their relationship. The recent one was when Tiger had an interaction with his fans through 'AMA' session on Instagram. Hottie Disha Patani Has Finally Mastered The FRONT-FLIP And It’s Super Impressive! Watch Video.

In this session online, as expected he was asked whether he is dating Disha! It was as if he had seen this question coming! The War actor gave a short, quick, cheeky reply that said, 'Meri aukaat nhi hai (I am not worthy of it).' Well, that's another googly thrown by the dancer-actor. Given to the fact that they dine together almost everyday and go on mushy vacations, this answer will make fans roll their eyes!

Looks like the couple has decided to dodge the questions related to each other through such extra modest answers. Earlier, when Disha was asked about the same, she was quoted saying, "I’ve been trying for so long, it’s been so many years and I’ve been trying to impress him. Now I’ve done this film Bharat where I’m doing all these stunts and I thought maybe he’ll get impressed but no luck. Yeah, we go to eat but that doesn’t mean he’s impressed."

Meanwhile, on the professional front, Disha was last seen in Salman Khan starrer Bharat. Next, she will be see in Mohit Suri directed Malang opposite Aditya Roy Kapur and co-starring Anil Kapoor, Kunal Kemmu. Speaking of Tiger, he'll be next seen in War with Hrithik Roshan and Baaghi 3 opposite Shraddha Kapoor.

(The above story first appeared on LatestLY on Aug 10, 2019 09:37 PM IST. For more news and updates on politics, world, sports, entertainment and lifestyle, log on to our website latestly.com).