The much-awaited trailer of Time To Dance starring Katrina Kaif's sister Isabelle Kaif and Sooraj Pancholi is finally out. As the name suggests, the movie revolves around dance (quite literally). And well, it's quite a yawnfest. Check it out. 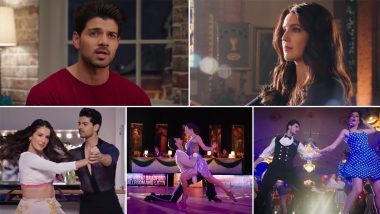 The much-awaited trailer of Time To Dance starring Katrina Kaif's sister Isabelle Kaif and Sooraj Pancholi is finally out. As the name suggests, the movie revolves around dance (quite literally). This happens to be Isabelle's debut film whereas fans will see Sooraj on the silver screen after a hiatus. Talking about their performances, in one word, it's mediocre. Haven't we seen films in the past where the leads fight it out to win a dance competition? So, what's new here? Time To Dance Trailer: Sooraj Pancholi And Isabelle Kaif Make A Sizzling Pair In Stanley Menino D’Costa’s Film! (Watch Video).

The trailer begins with Isabelle as a professional dancer with her partner named William. The two are soon to take part in a dance competition, but Kaif injures her leg which leads to William saying goodbye to her. Here, enters Sooraj as the saviour, who learns dancing and becomes a partner of Isabelle. All in all, a typical damsel in distress storyline where the man arrives to save and rest is history. Quite predictable right? Mosagallu Trailer Review: Vishnu Manchu, Kajal Aggarwal Scam the Rich While Suniel Shetty Tries to Stop Them in This Intriguing Story (Watch Video).

Watch the Trailer of Isabelle Kaif and Sooraj Pancholi's Time To Dance Here:

Helmed by Stanley D'Costa, the only best thing about the movie will be that it'll make Indian viewers see what ballroom and Latin dance looks like. Apart from the leads, Time To Dance also stars Waluscha De Sousa and Rajpal Yadav in supporting roles. The movie releases in theatres on March 12. So, how did you find the trailer? Tell us in the comment section below. Stay tuned!

(The above story first appeared on LatestLY on Feb 25, 2021 06:08 PM IST. For more news and updates on politics, world, sports, entertainment and lifestyle, log on to our website latestly.com).