Adele had previously postponed her Las Vegas Residency which made fans furious after they spent a lot of money to be there. She had cancelled the show due to COVID-19 concerns. As a way to make up for it, Adele has now announced a special two day concert at Hyde Park in London. It will feature an all female lineup of artists. 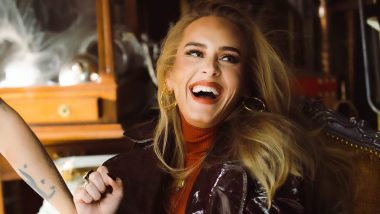 Singer Adele is making amends with a special two-day concert spectacular. The show, billed as BST (for British Summer Time) will feature an all-female lineup of artists, highlighted by Kacey Musgraves. According to Deadline, it will be held on July 1-2 in London's Hyde Park. Adele’s London Apartment Features ‘A Wine Store and an Energy Centre’.

"The line up for my Hyde Park shows next week is going to blow your socks off!" Adele wrote on social media, sharing a poster for the festival as well as a black-and-white graphic of her with some of her guest performers.

"An all-female bill, from new artists that I'm obsessed with to the heavenly @KaceyMusgraves to one of my favourite artists of all time @GabrielleUk who I've loved since I was 4!! It's going to be incredible, there's a whole host of us performing all day, I can't wait to share the main stage with you ladies," added Adele.

The shows are a shot at redemption for the 34-year-old British singer, who backed out of a long Las Vegas residency earlier this year, leaving many fans fuming after expending travel time and shelling out for lodging.  BST Hyde Park is sponsored by American Express and takes place every year across two weekends in London. Singer Adele Postpones Las Vegas Residency Due to COVID-19 Concerns.

The event will begin on Friday with headliner Elton John, and is expected to end July 10 with Duran Duran. In between, Eagles, Pearl Jam, and The Rolling Stones will be headlining different days of the festival, all of them hosting their own roster of guest stars.

(The above story first appeared on LatestLY on Jun 24, 2022 04:37 PM IST. For more news and updates on politics, world, sports, entertainment and lifestyle, log on to our website latestly.com).