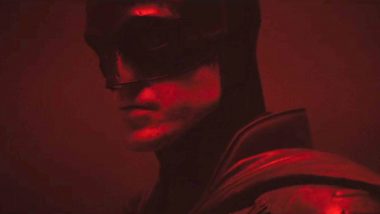 Robert Pattinson in and as The Batman (Photo Credits: Twitter)

Fans can gear up for the first preview into the world of the much-hyped upcoming superhero film, Batman, which introduces Robert Pattinson as the caped crusader. Director Matt Reeves will release the preview at the DC FanDome on August 22, which will have hosts across India, Australia, Brazil, Canada, China, France, Germany, Italy, Japan, Mexico, South Africa, South Korea, Spain, the US, and the UK. It was earlier announced that Robert Pattinson would be joining the virtual global event. Now, it has been revealed that Reeves will launch the preview along with a few surprises at a Batman panel during the fest. The Devil All The Time Trailer: Tom Holland, Sebastian Stan and Robert Pattinson’s Next for Netflix is a Sinful Psychological Thriller (Watch Video)

One can also expect an update on the standalone "Flash" film, with filmmakers Andy and Barbara Muschietti, star Ezra Miller, and screenwriter Christina Hodson joining for a panel for the upcoming feature film version of "The Flash". The event also include panels featuring the filmmakers and casts of "Wonder Woman 1984", "The Suicide Squad" and the Zack Snyder Cut of "Justice League" and the casts of TV series including "DC's Legends of Tomorrow", "Batwoman", "Black Lightning" and "The Flash". The Devil All The Time: Tom Holland, Robert Pattinson’s First Looks from the Upcoming Netflix Thriller Revealed! (View Pics)

The event, which will feature over 40 hours of programming celebrating past, present and future DC content, will also include a performance by Chris Daughtry of his song "Waiting for Superman", and the premiere of the animated feature "Superman: Man Of Tomorrow" starring Darren Criss, Zachary Quinto, and Alexandra Daddario. The event will also share new updates about other Warner Bros. films and TV shows, like "Aquaman", "Black Adam", and "SHAZAM!".

(The above story first appeared on LatestLY on Aug 15, 2020 01:11 PM IST. For more news and updates on politics, world, sports, entertainment and lifestyle, log on to our website latestly.com).