Bradley Cooper flexed his tennis skills with Serena and Venus Williams for History Talks in Washington D.C. He addressed Serena's recent retirement, to which she said that she has given herself permission to return if she feels like it and would definitely come back if she did. 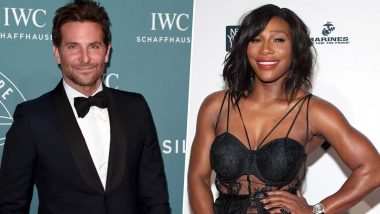 Bradley Cooper (Hangover and A Star is Born) flexed a new skill on Saturday as the actor-turned-director interviewed tennis legends Serena and Venus Williams for the A+E Networks and the History Channel's History Talks in Washington D.C., reports Variety. At the top of the conversation, he addressed Serena's recent announcement that she was retiring from tennis. Irina Shayk's Bikini Pictures With a Shirtless Bradley Cooper Spark Rumours of Their Romantic Reconciliation.

She played her final match at the U.S. Open earlier this month in New York City. "I just needed to stop," Serena said, recalling her headline-making move. "I always said I wanted to stop when I was playing really good tennis and winning and beating good players. For me, it's really about things I want to do spiritually and spending time with my daughter and family."

She continued: "As a super hands-on mom, I can't tell you how hard it was. I lost so many matches after I had Olympia' -- in 2017 -- "because it was so hard to be on the court. I feel like I've given so much of my life to tennis, my entire life, that it's time to do something different for me and also work on other things." Serena Williams Retires: A Look at American Tennis Legend's Major Achievements in her 26-Year Professional Career Following 2022 US Open Exit.

But fear not, tennis enthusiasts, notes Variety: There's a chance Serena will pick up a racquet again. She said she's given herself permission to return to the court. "I feel like if I want to come back, I definitely can still come back," she said.

(The above story first appeared on LatestLY on Sep 25, 2022 07:02 PM IST. For more news and updates on politics, world, sports, entertainment and lifestyle, log on to our website latestly.com).