Freddie Mercury died in 1991 at age 45 due to complications from AIDS. He has given rock music lovers some iconic tunes that are out of this world. Read the full story. 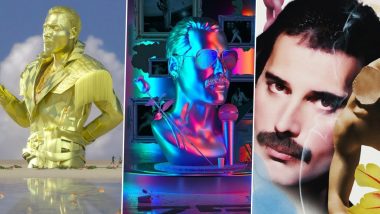 If you happen to be a fan of the iconic British singer-songwriter, Freddie Mercury, then we have news for you. As non-fungible token (NFT) artworks inspired by late Queen frontman are all set to be auctioned for AIDS charity to mark his 75th birth anniversary, which was on September 5. As per reports, there are in total of four artworks. While three of them feature the singer, the fourth one is a dreamy white piano 'with a crown on its stool, surrounded by a pond of swimming goldfish.' Freddie Mercury's 10 Of The Best Songs From Queen (It Wasn't Easy To Choose).

As per the organisers, this one will be a timed auction on September 20 online where the valuables will be sold on digital art marketplace SuperRare for over 75 hours. This one will see the works by artists Blake Kathryn, Chad Knight, Mat Maitland, and MBSJQ. For the ones unaware, all the money collected from the auction will go to The Mercury Phoenix Trust.  Founded by Queen members Brian May and Roger Taylor and band manager Jim Beach, the trust is an AIDS charity built in the memory of Mercury. Queen Frontman Freddie Mercury Performs ‘Time Waits for No One’ in This Unreleased Music Video – (Watch Video).

“You can do whatever you want with my work, just never make me boring.” Freddie Mercury 💛@SuperRare and The @The_MPT announce four new NFT artworks celebrating Freddie Mercury’s 75th birthday!✨ pic.twitter.com/TxSmI2TECb

“Freddie Mercury left a very simple creative brief to the world on his passing. ‘You can do whatever you want with my work, just never make me boring’,” SuperRare and the Mercury Phoenix Trust said in a joint statement on Thursday (September 16).

Indeed, this is a great attempt by and for Freddie fans wherein the proceedings will be used in an effective manner for the ones who are diagnosed with AIDS. Lastly, Mercury died in November 1991 at age 45 due to complications from AIDS. He had written numerous hits for the rock band, Queen, including Killer Queen, Bohemian Rhapsody, Somebody to Love, and many more. Stay tuned!

(The above story first appeared on LatestLY on Sep 17, 2021 04:06 PM IST. For more news and updates on politics, world, sports, entertainment and lifestyle, log on to our website latestly.com).