After directing Kill Bill Vol 1 and 2, Quentin Tarantino is looking forward to directing its sequel. With barely one project left in his hand, he is pushing the thoughts about this sequel a little harder. The director has already spoken to Uma Thurman about the same and if all goes well, we can expect a Volume 3 announcement by the duo. 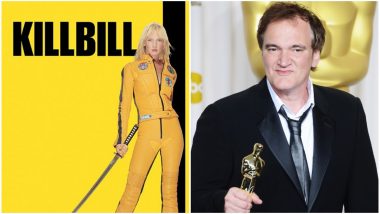 Unless you are living under a rock, you should know about Quentin Tarantino's rule about retiring after his 10 Hollywood directorial. From Reservoir Dogs to the recent Once Upon a Time in Hollywood, the director has all the distinguished movies under his name and we are so looking forward to his final announcement. Till date, Tarantino has directed 9 movies (including Brad Pitt and Leonardo Di Caprio's next) and that leaves him with one final attempt. And if all goes well, Uma Thurman's Kill Bill sequel could be his last project. Quentin Tarantino Reveals His Favorite Marvel Film and No, It's Not Avengers: Endgame!

Speaking about the same possibility, Quentin in his recent interview on MTV’s Happy Sad Confused podcast, said, "Me and Uma have talked about it recently, frankly, to tell you the truth. I have thought about it a little further. We were talking about it literally last week. If any of my movies were going to spring from my other movies, it would be a third Kill Bill." Earlier the director had shown interest in directing Volume 3 of his action entertainer where the story would revolve around Vernita Green's daughter pursuing vengeance against Thurman’s Beatrix. Once Upon a Time in Hollywood: Leonardo DiCaprio, Brad Pitt, Margot Robbie, Al Pacino – Who Is Playing Who in Quentin Tarantino’s Film!

Tarantino was always firm about his decision of retiring after directing 10 movies in Hollywood and his thoughts haven't really changed. "I think when it comes to theatrical movies, I’ve come to the end of the road. I see myself writing film books and starting to write theatre, so I’ll still be creative. I just think I’ve given all I have to give to movies," he said while speaking to GQ Australia. Well, we don't know about others but we are definitely rooting for this sequel and we hope things fall in place eventually.

(The above story first appeared on LatestLY on Jul 23, 2019 09:40 AM IST. For more news and updates on politics, world, sports, entertainment and lifestyle, log on to our website latestly.com).