Rishi Kapoor To Work With Former Co-Star Juhi Chawla After Returning To India? 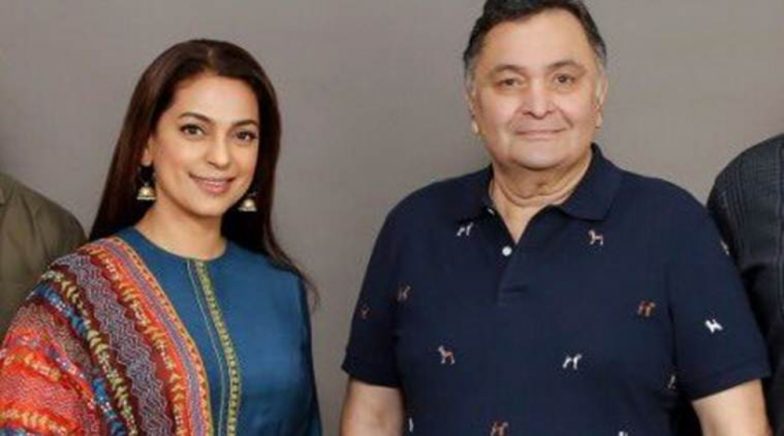 Rishi Kapoor recently revealed that he is trying to return to India by the end of August. The veteran actor was diagnosed with cancer eight months back and ever since then he has been in New York for his treatment. The good news is that Rishi has won the battle with cancer and is feeling better with every passing day. As soon as he comes back to his home country, the actor is planning to jump right onto his pending projects. According to an India Today report, Rishi will re-unite with his former co-star Juhi Chawla for a film that came to a halt due to Rishi's health issues.

Juhi had posted a picture with Rishi and newcomer director Hitesh Bhatia on her Instagram account in September last year. In the caption, she wrote that she is waiting to join the crew back and challenge Rishi to a game in Scrabble. Rishi Kapoor Is 'Feeling Good', Plans To Return To India By The End Of August.

The upcoming movie is going to be a family comedy. The production began in September last year, but things were put on hold after Rishi left for New York. At that time, the Kapoor family was also facing some other difficulties that included the sale of the iconic RK Studios and the death of Krishna Raj Kapoor. But now that Rishi will return to India soon, the film is all set to go on floors again after almost a year. Rishi and Juhi shared the screen space in Zoya Akhtar's Luck By Chance, which released in 2009. Rishi played the role of a movie producer in the film, while Juhi was seen as his wife. Rishi was last seen on-screen in 102 Not Out with Amitabh Bachchan.