Sergei Eisenstein studied architecture and engineering and even served at the Bolshevik Revolution. 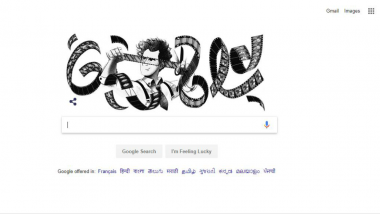 It is the 120th birth anniversary of Soviet filmmaker Sergei Eisenstein today and Google has paid a tribute to the artist who made a huge contribution in the field of film-making. Eisenstein was known for introducing the montage technique. A montage refers to an editing technique wherein a series of short shots are pieced together to form a sequence. This technique gave a unique effect since it very well condensed time, space and information. The Google doodle shows film rolls in a movement which if you look closely depicts imagery from his films. There is a lookalike cartoon figure resembling Eisenstein holding a film-roll and scissors which denotes editing.

Sergei Eisenstein was born on January 22, 1898, in Riga (then Russia) in an affluent family. He studied architecture and engineering and even served at the Bolshevik Revolution. In 1920, he pursued into theatre and by 1925 he was ready with his first feature film called Strike. It was a silent film depicting a worker’s protest in pre-communist Russia. In his next film Battleship Potemkin, he used the technique of montage. This film was divided into five plots and showed the rebellion between the crew of Russian battleship and the officers. It was not just a revolutionary propaganda film but a considered one of the masterpieces in the world of cinema. Some of the other films made by the filmmaker are- October, Alexander Nevsky, The General Line, Ivan The Terrible.

Eisenstein had appealed to the audiences because of his editing techniques and the ability to send a message across despite not following a chronology. He is thus rightly called the Father of Montage. His film enjoyed cult status all over the globe although they were banned in Russia. He contributed more to realistic filmmaking showing the struggles of the working class. The director is in fact termed as the best understanding of the art of motion pictures. Sergei Eisenstein breathed his last on in 1948 due to a heart attack. He was just 50 years of age.

(The above story first appeared on LatestLY on Jan 22, 2018 11:35 AM IST. For more news and updates on politics, world, sports, entertainment and lifestyle, log on to our website latestly.com).