MG Ramachandran Birth Anniversary: 5 Interesting Facts Of One Of The Most Influential Actors Of Tamil Cinema You Should Know

Maruthur Gopala Ramachandran aka MGR was one of the most influential actors of his time. He also served as the Chief Minister of Tamil Nadu from the period 1977 to 1987. 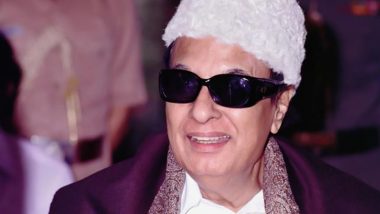 Maruthur Gopala Ramachandran aka MGR was one of the most influential actors of his time. He also served as the Chief Minister of Tamil Nadu from the period 1977 to 1987. He was the first actor to become a chief minister in the country. The founder of AIADMK was regarded as the cultural icon. MGR became a member of the DMK party and he build his political base by using his popularity as a movie star. The legend had started his acting career right from his school days. He had taken part in the troupe named Boys Company and attended several training programmes to hone his skills. On the occasion of his 105th birth anniversary, let’s take a look at some of the interesting facts about him. From Manthiri Kumari To Aayirathil Oruvan, 5 Popular Films Of The Late Actor-Politician MGR!

A Malayali – MGR was born to Melakkath Gopalan Menon, a Palakkad Mannadiyar Nair and Maruthur Satyabhama, a Vadavannur Vellalar from Palakkad. Yes, he was born in a Malayali family.

Breakthrough Film – In 1936 MGR had made his acting debut, however, it was in 1954 that he got his breakthrough role with the film Malaikkallan, the screenplay of which was penned by M Karunanidhi.

Marriages – MGR married thrice, but had no children from any of his marriages. He first wife Chitarikulam Bargavi died due to certain illness. His second wife Satyanandavati passed away soon after their marriage due to tuberculosis. And for the third time he married Tamil actress VN Janaki.

(The above story first appeared on LatestLY on Jan 17, 2022 08:43 AM IST. For more news and updates on politics, world, sports, entertainment and lifestyle, log on to our website latestly.com).