Parvathy Thiruvothu is a popular Malayalam actress. On the occasion of the actress’ 34th birthday, let’s take a look at those five films in which she proved that’s she’s a powerhouse of talent. 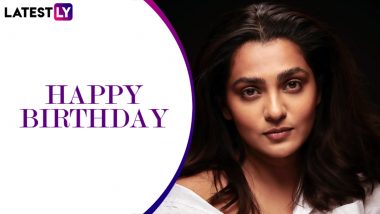 Parvathy Thiruvothu is a popular Malayalam actress. She is also known for her works in the Tamil and Kannada film industries. Her power-packed performances have shot her to fame in Indian Cinema. Be it the role of a teenage girl or an acid attack survivor, Parvathy has just raised the bar with each performance. The actress, who has turned a year old today, is indeed a powerhouse of talent. One just can’t get over her performances that she has delivered on the big screen ever since her debut. 10 Inspiring and Powerful Quotes by Parvathy Thiruvothu That Will Enlighten Your Mind!

It was in 2006 when Parvathy Thiruvothu made her acting debut with the film Out of Syllabus. But it was her second movie with ace filmmaker Rosshan Andrrews that shot her to fame. On the occasion of the actress’ 34th birthday, let’s take a look at those five films in which she proved that’s she’s a powerhouse of talent.

The movie that revolved around teenage pregnancy starred Maria Roy, Roma Asrani, Parvathy Thiruvothu in the lead. Parvathy portrayed the character Pooja, who is an ambitious student and has a very practical mind.

It was one of the most beautiful love tale that the audience witnessed. This tragic love story was based on the real-life story of Kanchanamala and BP Moideen and it was Parvathy and Prithviraj Sukumaran who portrayed their characters in reel. It focused how inter-religious marriages were a taboo in 1960s and how a young couple had to part ways due to their families’ objections.

Parvathy’s role in Mahesh Narayan’s film bagged her IFFI Best Actor Award (Female) and that made her the first ever Indian film actress to win the silver peacock award. Not just that, she was even nominated for National Film Award for Best Actress.

The Malayalam actress plays the character Pallavi Raveendran, an aviation student, who survives an acid attack that puts her career at risk. She once again won audiences’ hearts with her performance.

The film featured an ensemble cast such as Kunchacko Boban, Tovino Thomas, Asif Ali, Indrajith Sukumaran, Rima Kallingal among others. Parvathy played the character Dr Annu, a post-graduation medical student, in this film. She was seen as a part of the medical team during the Nipah outbreak.

These are some of the amazing performances played by the actress and that the movie buffs have loved. We look forward to many such roles from Parvathy, one of the finest gems of Malayalam Cinema. Here’s wishing her a very happy birthday and a great year ahead.

(The above story first appeared on LatestLY on Apr 07, 2022 09:09 AM IST. For more news and updates on politics, world, sports, entertainment and lifestyle, log on to our website latestly.com).