RRR actor Ram Charan was spotted at Mumbai airport, as he was seen in unusual black attire walking barefoot. 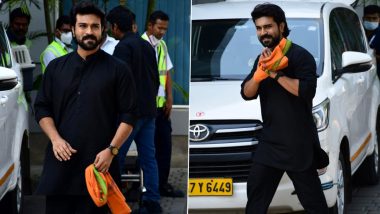 RRR actor Ram Charan was spotted at Mumbai airport, as he was seen in unusual black attire walking barefoot. The Rangasthalam actor observes a 41-day Deeksha, which is the reason behind his attire. Ram Charan, a core believer of Sabarimala Ayyappa, generally observes 'Deeksha', a 41-day ritual, whenever possible. As the actor was busy with back-to-back promotions for 'RRR', he started the 'Deeksha' post the movie's grand release. RRR Box Office Collection Week 2: Hindi Version Of Ram Charan, Jr NTR’s Film Stands At A Total Of Rs 184.59 Crore In India!

Ram Charan, who is a pet lover, had taken this oath to follow the Deeksha ritual, as he had a mannat when his pet dog 'Brat' fell sick some time ago. "I lost my Brat (pet dog) earlier. That pain was haunting me and hence my wife Upasana gifted me a similar puppy. I named him Brat, again. Brat got his leg fractured and hence I have a mannat that I will not eat non-vegetarian food until he gets up and run," Ram Charan had explained in one of his interviews earlier. Pushpa, RRR Reaffirms Tollywood’s Pan-India Appeal With Overseas Box-Office Dominance at the Same Time.

Now that the 'Magadheera' actor appeared in black Kurta and barefooted attire, close sources claim that the actor does it every once in a while, to keep his loved ones in his prayers and for positivity.

(The above story first appeared on LatestLY on Apr 04, 2022 03:00 PM IST. For more news and updates on politics, world, sports, entertainment and lifestyle, log on to our website latestly.com).