Chef Vikas Khanna has given a befitting reply to the trolls who sent him hate messages after he shared a picture of Asim Riaz feeding him in the Bigg Boss 13 house. Read on! 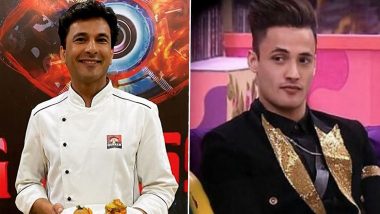 Celebrated chef around the globe, Vikas Khanna had recently made his presence felt on the most controversial reality show, Bigg Boss 13. But little did he know that his foody and humble intentions will be questioned and how. For the ones, who are living under the rock, it so happened that the chef had assigned a cooking task to the contestants wherein the winning team was rewarded with a Michelin cooked food by Vikas Khanna himself. Khanna was overjoyed to be on the reality show and so shared a picture of himself from the BB 13 house where Asim Riaz was seen feeding Vikas a bite from the served food. However, the chef was trolled on social media over the photo wherein the many questioned his faith. Bigg Boss 13: Sidharth Shukla's Mother, Rashami Desai's Brother, Paras Chhabra's Girlfriend, Asim Riaz's Father, Family Members To Go Inside The House Next Week.

Taking a stand and voicing his opinion over the backlash on social media, Khanna took to his Instagram account and shared a long post stating that he is an Indian and that's his faith. In his heartfelt Instagram post, the chef stated that while other housemates were savouring the food, it was Asim who offered him a bite with his hands and he was indeed touched by the gesture. He also mentioned in the post who he admires people with big hearts even if they are on the receiving end. Happy Birthday Vikas Khanna: From Tandoori Murg Masala to Soya Chilli, Here Are Some Delicacies by the Indian Michelin Star Chef.

Yesterday I posted a pic on my Insta Story of #AsimRiaz feeding me cake that how that moment moved me. Many people left extremely rude comments and questions.

Here is why that moment was important for me to express. pic.twitter.com/DiE0HxqAXd

Dear All. I was in BiggBoss house a few days back. We had spent hours and hours to create Michelin Style plates for the Winning team.......when everyone started eating, I was so happy to see them eat. They are living in isolation without any luxury for months, it was a satisfying moment for me to see them savour my food. Except for Asim, who served me a bite with his hands first. It was a genuine moment to thank me. When I posted this humble gesture on Insta Story, I got a lot of hate filled rude messages and questions. Even questioning my faith. I’m an Indian and that’s my faith. I have slept many days without food during my journey in America, I admire people with courage and big hearts even when they are at the receiving end. Humanity and Humility Shine even when they are silent and small. ❤️

With the long post by chef Vikas proved that he is indeed an open-minded soul and is not bothered with regards to religion. Also one thing, we do not understand is that how come trolls attack a chef for eating from a contestant's hand? Can the trolls broaden their horizon and stop dividing the country in the name of religion? Well, coming back to Khanna's post, we laud the chef for the same.

(The above story first appeared on LatestLY on Jan 13, 2020 02:37 PM IST. For more news and updates on politics, world, sports, entertainment and lifestyle, log on to our website latestly.com).