Tormund is at it again. He can't stop flirting with Brienne and his antics have left us laughing our guts out. 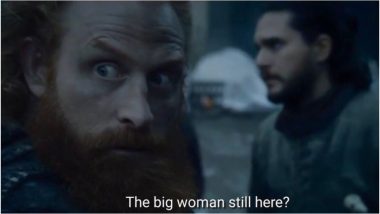 The second episode of Game Of Thrones is out now and we bet you can't hold your excitement for the next one already. With the big battle at Winterfell coming close, the second episode was mostly about fulfilling last wishes we'd say while Arya Stark's choice to swipe her v card with Gendry was a good decision, looks like Tormund too had his priorities set right. On his arrival at Winterfell, the first thing Tormund asked was, 'Is the big lady still here?'. Well, Tormund's straightforward flirting seems to have caught the social media eye and the meme makers are having a gala time using Tormund as their muse. Game Of Thrones Season 8 Episode 2: Brienne Of Tarth Gets 'Knighted' by Jaime Lannister and Twitter Says Fu*K Gender Norms

In the new episode, Tormund literally leaves no opportunity when it comes to putting his 'wildling' feelings out there for Brienne. While the newly 'Knighted' Brienne has nothing but awkward stares and occasional smiles to respond with, it is mainly the viewers of the show who are thoroughly entertained by his antics.

From talking about sucking on a giant's wife's tits to 'Knighting Brienne ten times over', Tormund had some weird things to say in the new episode.Game of Thrones 8: Arya Stark’s Sex Scene With Gendry Is Not Actress Maisie Williams’ First HOT Scene - Watch Video (SPOILER ALERT)

Here are the memes about Tormund's that are taking over the internet:

#Tormund reveals the source of his strenth. #GameofThrones pic.twitter.com/bAkqmROyC6

Smooth as ever Tormund 😆#gameofthrones pic.twitter.com/KDxUVQySkS

The secret of Tormund's energy is not Boost but Giant's Milk:

#GameofThrones Tormund downing some milk before the fight pic.twitter.com/vucwzMxYaF

Tormund when Lady Brienne is around:

Tormund's idea of a drink:

Tormund has been pure joy on the second episode of season 8 but will he survive ahead is the big question now as the third episode gears us up for the big night as White Walkers take on Winterfell. In the meantime, you can tell us who's your favorite couple in the Brienne, Tormund and Jaime love triangle.

(The above story first appeared on LatestLY on Apr 22, 2019 08:12 AM IST. For more news and updates on politics, world, sports, entertainment and lifestyle, log on to our website latestly.com).