Game Of Thrones Season 8 Episode 6 Telecast Time And Streaming: How to Watch GOT S08E06 in India

Here's where you can watch the big Game of Thrones finale airing today. 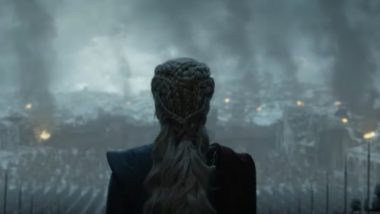 The final episode of Game Of Thrones is all set to air today and the eight-year-long journey will come to an end with the big reveal of who gets to sit on the Iron Throne. Over the past few weeks, the series is receiving a lot of criticism about its writing and the poor plot of the final season but that has not stopped viewers from binging on the last season of the show too. As the final episode airs today, we can't wait to see how the writers plan to tie the loose ends of every surviving character.  Game of Thrones Season 8 Finale: Daenerys Targaryen, Jon Snow, Tyrion Lannister, Arya Stark – Who Lives and Who Dies?

The episode five came as a shocker, what with Daenerys Targaryen going all 'Mad Queen' as she burnt down every inch of King's Landing. The episode also saw some major character deaths such as Cersei Lannister, Jaime Lannister and Lord Varys. The final episode will now show us the aftermath of King's Landing and the ultimate decision of who takes the throne. While fans have chosen their favourites, popular opinion on Twitter suggests that it could be Sansa Stark.

Game of Thrones season 8 episode 6 will be available on Hotstar Premium live with the US audience for the viewers in India. The OTT platform will begin streaming the new episode from 06:30 AM on May 20. Users will need the premium membership of Hotstar to be able to watch it. The premium service of the platform is available for Rs 299 per month for the premium membership.

While the viewers in US will enjoy watching the show on HBO, in India, thanks to HotStar, viewers won't have to wait to catch the show any later. Tune into HotStar for the big Game of Thrones finale today at 6.30 AM.

(The above story first appeared on LatestLY on May 20, 2019 06:14 AM IST. For more news and updates on politics, world, sports, entertainment and lifestyle, log on to our website latestly.com).