Today’s episode of Ishqbaaz starts with PN asking SSO (Nakul Mehta) where was he, SSO tells that he was in a shoot and ask them what is the matter. 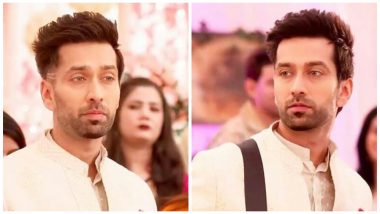 Today’s episode of Ishqbaaz starts with PN asking SSO (Nakul Mehta) where was he, SSO tells that he was in a shoot and ask them what is the matter. Shivani tells that she is waiting for you from when. SSO sees Aditi waiting for her and ask why she has come here. Before Aditi (Manjiri Pupala) could reply the police commissioner says that she has told her to come here. The commissioner tells SSO that his life is in danger and that the power cut was because of the ice knife which was aimed at SSO and it missed and hit the meter box. The commissioner came to know this all after seeing the video clip of the engagement party, she also says that Honey had called you but the call record does not show it. The commissioner tells SSO that someone is targeting him and he has to be alert and for that, she has told Aditi to be with him all day to protect him. SSO tells please don’t keep Aditi with him but the commissioner convinces SSO that Aditi will be with him. SSO thinks that from the world you will save me but who will save me from my death bed.

The commissioner tells Aditi to be with SSO and take care of him. PN calls out for Khanna, suddenly she gets a call from Angad’s mom, who tells her that Angad’s aunt wants to meet Shivani and talk about something. Radhika asks PN what she wants to ask Shivani now. Shivani is tense as Angad’s aunty is coming as she is very strict. PN prays that everything should be fine and god should help Shivani. SSO also comes to know that Angad’s aunty coming and thinks let her come and that she will be impressed by Shivani.

Angad’s aunty comes to Oberoi's Mansion, Angad’s introduce Sudha with all the family members. Dhruv tries to say a song on behalf of Sudha but she gets angry with him. Shivani comes and touches Sudha’s feet, she feels good about it. Sudha sees Radhika talking to Shivani. All sit together and have tea and snacks. PN and PD tell Sudha that she should have come for the engagement and that she has missed it. Sudha tells that she has brought a kajal from the temple and tells that she wants to put it on her would be daughter-in-law. Sudha tells that she would like to put it on Radhika also but she offends and tells she does not want it. Sudha tries to force Radhika to put the kajal and comes near her and takes her glasses, SSO comes in between and holds her and takes the glasses from Sudha and gives it back to Radhika. Sudha tells that why they are hiding the fact that Radhika’s eyes have some problem. SSO gets frustrated and shouts at Sudha and tells her to stop and hugs Radhika and says her eyes are fine and she is perfect. Sudha tells that before marriage they are hiding this thing what if Shivani also gets the same problem. SSO tells that this is not a disease. But Sudha gets angrier and tells SSO to say sorry and then only she will agree for this marriage.

In the precap, SSO tells Sudha that he can do anything for Shivani but if someone insults his PD he won’t spare them

(The above story first appeared on LatestLY on Jan 14, 2019 11:56 PM IST. For more news and updates on politics, world, sports, entertainment and lifestyle, log on to our website latestly.com).