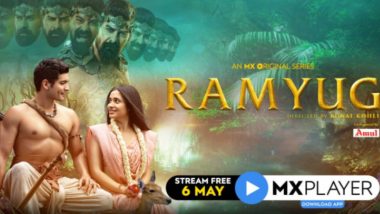 Ramanand Sagar's Ramayan which had a re-run last year in the lockdown appealed to the young generation because of its simplicity. Cut straight to Kunal Kohli's extravagant attempt with his web series Ramyug... will it be a hit? The mythological show is currently streaming on MX Player for free and is an adaptation of the epic Ramayana. The show stars Diganth Manchale (Ram), Akshay Dogra, Aiswarya Ojha (Sita), Vivaan Bhathena, Anup Soni and Kabir Duhan Singh in key roles. But is Ramyujg worth a watch...well, let's take a look at the early reviews below. Ramyug Trailer: Kunal Kohli's Take On Ramayan Looks Classy With A Fresh Cast (Watch Video).

BollywoodLife: "Ramyug is a well-made series but it is somewhat lacklustre in the writing, editing and screenplay department. The climax is quite modern (we will not give spoilers). But given the quality of production and VFX, we feel the young crowd will like it."

Firstpost: "To arrive at this abysmal show's biggest disappointment is how bland Kabir Duhan Singh is, as Raavan. While the actor has the physicality and the sinister beard, Singh's failings as an actor are all over the character. Kohli finds an interesting way to depict Raavan's ten heads, almost like an M Night Shyamalan character with multiple personalities, but the idea isn’t explored further."

TheIndianExpress: The storytelling of Ramyug is disappointing as it proceeds in a non-linear manner. Lord Rama, Sita and Lakshman are in the jungle but it takes until the third episode to understand the ‘how’ and ‘why’ behind it. In one of the scenes, when we meet Ravana for the first time, we see his ten heads circling and talking to him. Instead of adding to the impact of the scene and the persona of this crucial character, Ravana’s introduction seems comic."

SpotBoye: Comparisons may be unfair. But if you are gutsy enough to go where Sagar has gone before then be ready to face the comparisons. Ramyug seems ill-prepared for this."

Going by the above reviews, all we can say is that Ramyug is a disappointment. In a nutshell, it's visually appealing but lacks the essence. The only plus point we see is the VFX and the locale where it is shot. FYI, the shooting of this series has been done in the Mauritius. So, only watch for the visual feel. Stay tuned!

(The above story first appeared on LatestLY on May 06, 2021 02:41 PM IST. For more news and updates on politics, world, sports, entertainment and lifestyle, log on to our website latestly.com).