The man was initially a little hesitant when doctors informed him that he will be awake during the brain surgery. 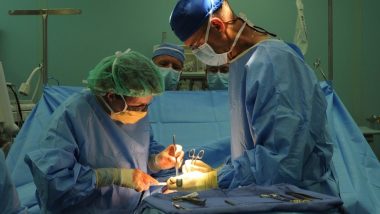 Videos of patients playing the guitar while getting surgery in operation theatre has gone viral multiple times in the past. In a recent such critical surgery in Jaipur, the patient was seen reciting Hanuman Chalisa! Yes, a man who was being operated to remove a tumour from his brain kept on repeating a Hindu devotional hymn for three hours straight.

The 30-year-old was a little hesitant when doctors informed him that he will be awake when the brain surgery will be conducted. However as the doctors during the counsel session told him how that will be the only way his speech would remain affected, he agreed. He was just given local anaesthesia which ensured he did not feel any physical pain or discomfort. Did God and Prayers Make Man’s Brain Tumour Disappear Without Surgery? 'Faith Healing' Could Be Behind The Miracle.

He was awake throughout the surgery and also responded to questions that doctors asked him about the operation. The surgery which was conducted on November 14 lasted for three-and-a-hour surgery. The doctors in Jaipur who conducted the surgery said that the technique is known as 'Awake Craniotomy'. In many brain surgeries, patients are encouraged to remain awake as the doctors can understand the exact spot without causing damage to other parts of the brain. This is not possible if the person is sedated, hence 'Awake Craniotomy' is encouraged.

An MRI conducted one and a half month after the surgery ascertained that the tumour was completely removed. Doctors also disclosed details of the unique surgery they had conducted. According to a report in The Times of India, the hospital said that the resident of Dungargarh of Bikaner district said that he had earlier gone to a private hospital in Ahmedabad where he was refused over the risk of speech loss. The man was suffering from a Grade 2 Brain Tumor and had been also got bouts of Epilepsy seizure in the past three months.

As the man was completely awake during the surgery and repeating Hanuman Chalisa, doctors could rightly understand the point of damage in his brain. If they touched a wrong spot, his speech would get illegible. Such awake brain surgeries are performed by neuro-surgeons across the world.

(The above story first appeared on LatestLY on Dec 27, 2018 12:14 PM IST. For more news and updates on politics, world, sports, entertainment and lifestyle, log on to our website latestly.com).