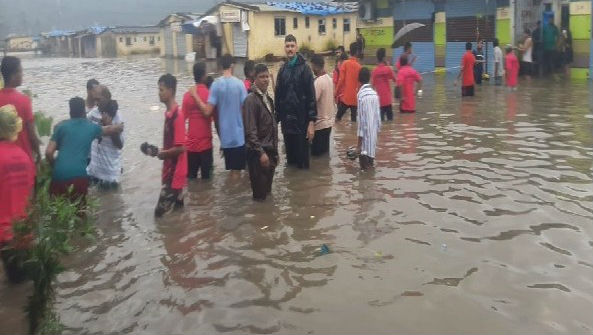 Mumbai, August 4: At least five persons were killed in Mumbai and Satara as rains continued to clobber large parts of Maharashtra, especially the coastal Konkan region, on Sunday, hitting train services badly. IAF helicopters rescued 58 people in Thane and boats were deployed to rescue around 400 people stranded in Mumbai suburbs, officials said. In the state capital, Mala Nigam, 52, and her son Sanket, 26, were killed due to electrocution in Santacruz east and Mehboob M. Shaikh, 20, was washed away in the Mahim Creek off Dharavi, said the BMC Disaster Control. Maharashtra Rains: Flood Threat Issued in Pune as Water Level in Dams Reaches Danger Mark Due to Heavy Downpour.

Two persons from Pune - Nitin Shelar and Vaishakh Nambiar - drowned in a waterfall in Satara after their car rammed a barricade on a bridge and tumbled into a flooded rocky drain at Babhalnala early on Sunday, said police official Mahesh Bhavikatti.

All private and public schools and colleges will remain shut tomorrow . Some government offices providing emergency & essential services will remain open. Private office staff may move out only if essential #MCGMUpdates #MumbaiRainsLiveUpdates

"They have been temporarily shifted to Bazarwad Municipal School and other schools. Congress activists have also made arrangements for food, water and medical help as required," local MLA and Congress deputy leader in Assembly Naseem Khan said. Mumbai Rains Live News Updates, Traffic And Local Train Status For Today, August 3, 2019.

The Indian Air Force deployed a MI-17 helicopter to rescue 58 villagers, including 18 children, from Ju village in neigbouring Thane as they were stranded in rising flood waters. In another operation, the IAF chopper flew to rescue 15 marooned villagers in Buranda (Palghar) but returned as it could not locate them due to heavy rain and poor visibility.

The operations were conducted after a request by the Maharashtra government, and all the stranded people were shifted to safer locations at the Air Force Station in Thane, said an official spokesperson. In Church Road-Dahanukarwadi areas of Kandivali, some locals made temporary rafts of wooden boards to ferry people to nearby areas for replenishing stocks of essentials.

In some villages in Pen of Raigad district, around 60 people, stuck in five-six feet deep water since 4 a.m. on Sunday, were rescued by NDRF teams in boats and similarly 40 saved from marooned Mori village in Palghar this afternoon. Most schools and college in Mumbai, Thane, Ratnagiri and Pune have declared a holiday on Monday in view of continuing rains, local officials said.

Education Minister Vinod Tawde announced that reporting to ARC and Institutes for CAP Round II for First Year PG Technical Courses in ME/M.Tech. has been extended till August 6 and August 7 respectively in view of the heavy rains. Meanwhile, Western Railway (WR) services between Vasai-Virar were suspended for several hours as the tracks were flooded, before resuming at reduced speeds after 2.35 p.m.

Even Central Railway (CR) services were hit in some sectors like Kurla-Sion due to waterlogging on tracks, breaches in railway lines, and landslides on outstation routes, while its suburban Harbour Line was paralysed. Owing to boulders falling on railway tracks, the CR cancelled 18 trains, diverted three services and short-terminated seven long-distance trains at various points. Trains like the Nagpur-Mumbai Duronto Express were stuck at Igatpuri since 4 a.m.

Thousands of outstation passengers were stranded at various stations in Mumbai, Thane and Palghar as the train services were disrupted, while hundreds more were stuck in incoming trains that have been halted at various locations en route. Maharashtra Rains: 4 Cattle Washed Away in Palghar as Water Level in Surya River Rises, Watch Video.

Similar chaos was witnessed on the Konkan Railway with trains getting delayed, inconveniencing thousands of passengers. A portion of a bridge on Pinjal River in Palghar was washed away on Sunday morning, bringing traffic to a complete halt on both sides, though there are no casualties.

Mumbai experienced a 4.86 metres high tide at 2.29 p.m., and the combined effect of the existing waterlogging and continuing rains, led to homes in many parts of the suburbs experiencing fresh flooding this afternoon. The BMC, NDRF, two columns of Indian Army, Navy and Air Force, besides all other agencies are on a high alert for any eventuality in Mumbai and Thane.

In Mumbai several vulnerable spots in Dahisar, Borivali, Kandivali, Andheri, Santacruz, Khar, Bandra, Matunga, Parel, Dadar, Kings Circle, Sion, Vikhroli, Ghatkopar, Kurla, Bhandup, Mulund and other parts were flooded. However, there were no traffic snarls, since it was a holiday.

Subways in Kandivali, Malad, and Andheri were flooded, hampering traffic movement in the east-west directions. However, most flights were operating at Chhatrapati Shivaji Maharaj International Airport with delays of around 30 minutes, said officials. Till Sunday evening, the IMD said Mumbai city recorded 151 mm rains and the suburbs notched 224 mm. The BMC's rain monitors pegged the figure at 137 mm for Mumbai city, 236 mm for eastern and 218 mm for western suburbs till evening.

The BMC Disaster Control had issued warnings to people not to venture near the beaches or seafront for the next two days due to high tides, strong waves besides forecast of heavy rains. Mumbai, Konkan and other districts like Pune, Nashik, Kolhapur, Satara, Ahmednagar, have been witnessing torrential downpour virtually non-stop since July 25, hitting routine life.