After the announcement of the presidential poll, Bihar Rural Development Minister Shrawan Kumar on Thursday said that Chief Minister Nitish Kumar has all the ability to hold the office of President. 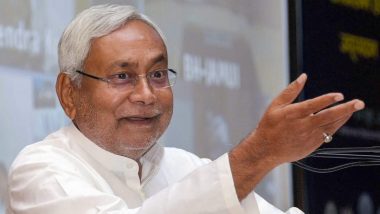 Patna, June 9: After the announcement of the presidential poll, Bihar Rural Development Minister Shrawon kumar on Thursday said that Chief Minister Nitish Kumar has all the ability to hold the office of President.

"Being a Bihari, I wish that Nitish Kumar will become President of India. He has brought extremely backward Bihar on the track and if he would be given a chance to work as a President of India, he will give his efforts to bring the country forward in the world," the minister, who belongs to Nitish Kumar's Janata Dal-United, said. President Election 2022: EC Announces Schedule, Nominations Till June 29, Voting on July 18, Results on July 21

"Nitish Kumar is not in the race for the post of President but every person would want him to become the President of the country. He is a better candidate for the post and he can hold the responsibility well," he added.

The statement of Shrawon kumar came at a time when the political relationship of JD-U and BJP are improving in Bihar these days. Recently, Nitish Kumar appreciated the job of Industry Minister and BJP leader Shahnawaz Hussain during two public events.

Meanwhile, BJP leaders, including its state President Sanjay Jaiswal, who were critical of the Nitish Kumar government in the past are silent these days.

Even the JD-U and BJP leaders have shown unity during the nominations for Rajya Sabha and MLC candidates. Nitish Kumar, his deputies Tar K

(The above story first appeared on LatestLY on Jun 09, 2022 08:49 PM IST. For more news and updates on politics, world, sports, entertainment and lifestyle, log on to our website latestly.com).