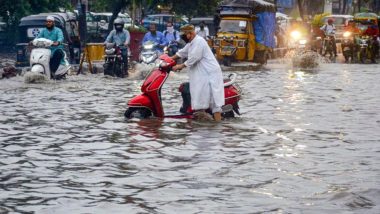 Bhopal, July 4: Moderate to heavy rainfall is likely to continue in parts of Madhya Pradesh for the next two days, India Meteorological Department (IMD) has predicted. Bhopal division of Met officials said that heavy rainfall is predicted in 15 districts in the next 24 hours.

The Met department on Monday afternoon issued an orange alert, recommending the state and the district administrations to be prepared for heavy to very heavy rainfall. Light to moderate rain continued to lash in several areas in the past 24 hours. Monsoon 2022: AQI in Delhi Satisfactory, Heavy Rains Likley on July 6, Says IMD

The IMD has also issued two yellow alerts, which calls on officials to be updated, one forecasting heavy rainfall at isolated places in Khandwa district and Bhopal and Narmadapuram divisions, and the second for possible thunderstorms with lightning at isolated places in the districts of 10 divisions, including Bhopal, Indore, Jabalpur and Gwalior.

A low pressure area over north Odisha and some other reasons was bringing moisture to MP, which in turn was causing rains.

(The above story first appeared on LatestLY on Jul 04, 2022 07:47 PM IST. For more news and updates on politics, world, sports, entertainment and lifestyle, log on to our website latestly.com).