Additional Solicitor General Sanjay Jain and senior advocate R. Balasubramanian, representing the Centre, apprised a bench headed by Justice D.Y. Chandrachud that out of 64 officers, 39 officers have been found, upon re-consideration, to be eligible for the grant of permanent commission. 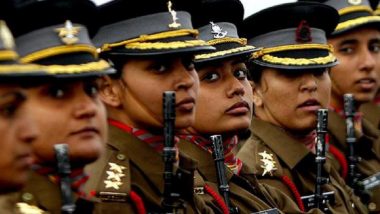 New Delhi, October 22: There was relief for a group of aggrieved women officers, who filed a contempt petition against the Army chief, as they were denied permanent commission -- allegedly in violation of a Supreme Court order, with the Centre on Friday telling the apex court it has cleared 39 women officers found eligible, after reconsideration, but rejected pleas of 25 others.

Additional Solicitor General Sanjay Jain and senior advocate R. Balasubramanian, representing the Centre, apprised a bench headed by Justice D.Y. Chandrachud that out of 64 officers, 39 officers have been found, upon re-consideration, to be eligible for the grant of permanent commission.

The bench also comprising Justice B.V. Nagarathna said: "In the above facts, we are of the view that the ends of justice would be met if, to begin with, orders for the grant of permanent commission are issued to all the thirty-nine officers, in terms of the statement which has been made before this Court by the ASG, on or before November 1, 2021. Compliance shall be scrupulously ensured on or before November 1, 2021." SC Directs Centre to Issue Orders Granting 39 Women Army Officers Permanent Commission in Seven Working Days.

The government informed the bench that a comprehensive exercise was carried out once again to re-determine the entitlement of 71 Women Short Service Commissioned Officers (WSSCOs). It was submitted though they had secured more than 60 per cent marks and fulfilled all the conditions for the grant of permanent commissions, but one officer has applied for release and seven officers were declared medically unfit.

Jain submitted that twenty-five officers were left out, as they were not found to be eligible on disciplinary grounds and, in certain cases, on other issues, such as, integrity or disobedience of lawful orders and operational weak reports.

He added that their counterparts in the Army, who are male officers, have been denied permanent commissions on similar grounds and, hence, there has been no discrimination with WSSCOs.

The bench noted that after the exercise of the grant of permanent commissions is completed, it would be necessary for the government to apprise the court of the grounds which have resulted in the denial to the remaining officers in the contempt proceedings.

The bench said an affidavit "shall be filed on behalf of the respondents before the next date of listing expressly stating that no reasons independent of the directions which have been issued by this Court have weighed in the grant or, as the case may be, refusal of PC to the seventy-two officers concerned".

As many as 36 women officers had moved the top court seeking contempt proceedings against army chief and officers, who had declined them permanent commissions, which was violation of the apex court judgment, passed in March this year.

(The above story first appeared on LatestLY on Oct 22, 2021 10:04 PM IST. For more news and updates on politics, world, sports, entertainment and lifestyle, log on to our website latestly.com).