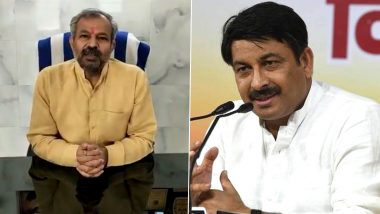 Tiwari, who was appointed Delhi BJP chief in 2016, had offered to resign after party's disastrous performance in 2020 Delhi Assembly polls. However, he was asked to continue till the alternative was found, reports said. In assembly elections, Aam Aadmi Party had won 62 seats out of 70 seats, while BJP secured eight.

On Monday, Tiwari was detained along with other party workers for alleged violation of COVID-19 lockdown norms after they gathered at Rajghat to protest against Arvind Kejriwal government's failure to contain the spread of coronavirus.

Last month, Tiwari stroked controversy after pictures and videos of him playing cricket went viral on social media. The former Delhi BJP chief played cricket at a stadium in Sonipat, Haryana, at a time when Delhi-Haryana borders were sealed.

(The above story first appeared on LatestLY on Jun 02, 2020 03:26 PM IST. For more news and updates on politics, world, sports, entertainment and lifestyle, log on to our website latestly.com).