"I regret to announce the sad and untimely demise of my father, Mr Ahmed Patel at 25/11/2020, 3:30 am," son Faisal said in his statement. He appealed all supporters of his late father to not to hold mass gatherings and follow the COVID-19-related protocols. 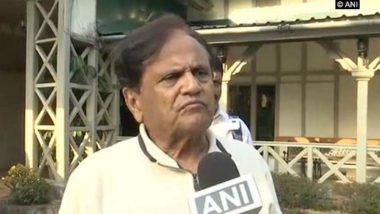 New Delhi, November 25: Senior Congress leader Ahmed Patel died in the wee hours of Wednesday. His son Faisal Patel issued a statement to confirm the tragic demise. He breathed his last at 3:30 am. The veteran politician was undergoing treatment for COVID-19 related complications at the Medanta Hospital in Gurugram. A week earlier, he was shifted to the intensive care unit after his health condition worsened.

Patel, 71, had tested positive for coronavirus last month. His health began deteriorating over the past two weeks. The reason of his death was stated to be multiple organ failures.

"I regret to announce the sad and untimely demise of my father, Mr Ahmed Patel at 25/11/2020, 3:30 am," son Faisal said in his statement. He appealed all supporters of his late father to not to hold mass gatherings and follow the COVID-19-related protocols.

Patel, one of the key organisational leaders of the Congress, was born in Bharuch in 1949. He was a noted parliamentarian from Gujarat, having represented the state three times in the Lok Sabha from Bharuch constituency. He was also nominated eight times to the Rajya Sabha from Gujarat.

During the UPA government years, Patel emerged as one of the top troubleshooters of the Congress party. During the period, he also served as the political secretary of Congress president Sonia Gandhi. Patel had last drawn widespread media glare in 2017 after he won a keenly contested battle for the Rajya Sabha seat from Gujarat -- the results of which were stretched till post midnight.

The death of Patel comes as a major setback for the Congress, at a time when the chorus is growing for introspection and overhaul within the party to overcome the spree of electoral defeats. The Congress, along with the entire Indian polity, was also jolted by the tragic demise of former Assam chief minister Tarun Gogoi o Monday. The 86-year-old succumbed to health-related ailments, nearly three months after contracting COVID-19.

(The above story first appeared on LatestLY on Nov 25, 2020 05:31 AM IST. For more news and updates on politics, world, sports, entertainment and lifestyle, log on to our website latestly.com).