Unable to find an ambulance, a family was forced to carry dead relative's body on a motorcycle for cremation in Andhra Pradesh's Srikakulam district on Monday. 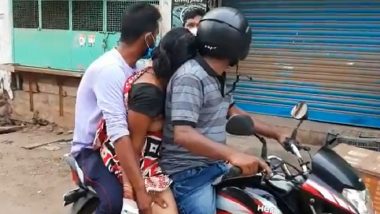 The woman had COVID-19 symptoms and got tested. While the family was waiting for the test results, her condition worsened on Monday. She was rushed to a hospital where she breathed her last, India Today reported. It was not confirmed whether she had died of COVID-19. After her death, the family for waiting for an ambulance or any other vehicle to transport her body.

At a time when fear of #COVIDSecondWave grips #Srikakulam dist, a family was forced to shift the body of a 50 yr old woman on a bike after their attempts to arrange #ambulance to take her back to their hamlet, failed on Monday. She was waiting for test results. @NewIndianXpress pic.twitter.com/7aO79Yk501

As their wait for an ambulance was getting longer, the family decided to ferry the woman's body on a bike. Eventually, the deceased woman's son and her son-in-law took her dead body to their village for cremation on a bike. Here it may be recalled that the Andhra Pradesh government had last year flagged a huge fleet of 1088 ambulances and 104 mobile medical units.

(The above story first appeared on LatestLY on Apr 27, 2021 01:44 PM IST. For more news and updates on politics, world, sports, entertainment and lifestyle, log on to our website latestly.com).