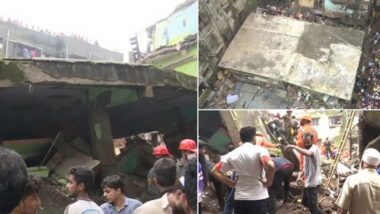 Mumbai, September 22:  The death toll in the Bhiwandi building collapse tragedy increased to 20 on Tuesday morning. The rescue operation is still underway to retrieve the people who are stuck under the debris.  Eight among the dead are children between the age of two and fourteen years. As per the officials of Bhiwandi Nizampur City Municipal Corporation (BNCMC), around twenty to twenty-five people are still trapped inside the debris.

The tragic incident took place at 3:30 am on Monday when the 36-year-old ground plus three-storey Jilani building, located at Patel compound in Dhamankar Naka, Bhiwandi in Maharashtra Thane district, collapsed. When the incident occurred, 62 residents were feared trapped inside the debris, however, the NDRF managed to rescue several people. Bhiwandi Building Collapse Tragedy: PM Narendra Modi Expresses Condolences to Families of Deceased, Says 'All Possible Assistance Being Provided to the Affected'.

Two civic officials have been suspended in connection with the building collapse incident and an offence has been registered against the building owner.

Since the incident took place at a time when most of the families were sleeping, it is being feared that the death toll would further increase. The rescue operations took a halt for 30 minutes on Tuesday morning as the team had to manage and balance the slab of the third floor that came crashing down. Locals have also been helping in the rescue operation.

According to the latest update, the death toll in the building collapse has increased to 20.

President Ram Nath Kovind and Prime Minister Narendra Modi condoled the loss of lives in the incident. The President tweeted, "The loss of lives in the building collapse at Bhiwandi, Maharashtra is quite distressing. In this hour of grief, my thoughts and prayers are with the accident victims. I wish speedy recovery of the injured. Local authorities are coordinating rescue and relief efforts."

Similarly, PM Modi had also tweeted praying for the quick recovery of people injured and expressing his condolences to the bereaved families.

(The above story first appeared on LatestLY on Sep 22, 2020 11:02 AM IST. For more news and updates on politics, world, sports, entertainment and lifestyle, log on to our website latestly.com).