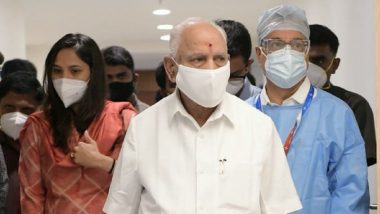 The victim, Soundarya, is the daughter of Padmavathi, Yediyurappa's second daughter.

The incident came to light at around 10.30 a.m. when the domestic helper came to wake her up for breakfast.

When she didn't open the door of her room, the helper informed others.

The apartment staff arrived and the victim hanging from the ceiling of the balcony and informed the police. Atmaram Tomar, Former Uttar Pradesh Minister, Found Dead in Baghpat Home Under Suspicious Circumstances.

Soundarya and her husband Neeraj had lived in the apartment since two and a half years.

The body has been shifted to the Bowring hospital for the post-mortem.

An investigation into the matter is currently underway.

(The above story first appeared on LatestLY on Jan 28, 2022 04:45 PM IST. For more news and updates on politics, world, sports, entertainment and lifestyle, log on to our website latestly.com).