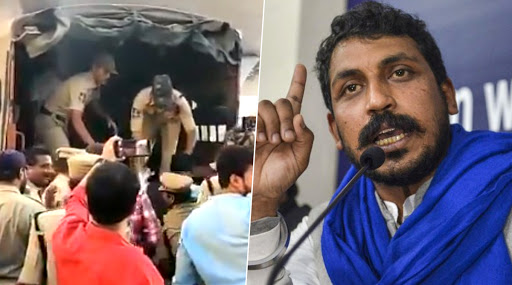 Hyderabad, January 26: The Hyderabad Police on Sunday detained Bhim Army chief Chandrashekhar Azad when he reached Crystal Garden in Mehdipatnam to participate in protest against Citizenship Amendment Act. He was supposed to address a public meeting organised by the All India Dalit Muslim Adivasi Progressive Front on the occasion of Republic Day. He has been taken to Goshamahal Police Station, as per initial reports.

According to various inputs, the Hyderabad Police also arrested several protesters who allegedly raised Azadi slogans. Following this, Police cancelled the permission to hold the public meeting against the Citizenship Amendment Act, National Register of Citizens and updation of National Population Register. Till now, there is no inputs if police have registered and FIR against Azad or not. Chandrashekhar Azad Allowed to Visit Delhi; Bail Order in Daryaganj Violence Case Modified.

Soon after arresting the Bhim Army chief, Hyderabad Police said, as quoted by news agency ANI, "Chandrashekar Azad has been detained ahead of his participation in a protest against CAA and NRC under Lungerhouse police station limits. The protesters didn’t have any police permission for the protest."

Here's a tweet by Azad, confirming about his arrest:

Here's a tweet on protesters being arrested by police and taken in a truck:

Apart from this, Azad was also supposed to address a gathering at Tata Institute of Social Sciences (TISS). The TISS Centre of Hyderabad's Students Union members had organised a protest programme against CAA, NRC and NPR on Republic Day. Informing more, a students union member had said, "Chandrashekhar Azad will address students over CAA along with several other issues that students are facing on campuses across the country."

It is to be known that on Wednesday, Azad joined the Shaheen Bagh protests in New Delhi and asked to the people to keep faith in the Constitution. Azad was granted bail earlier this month, after being arrested on December 21 for joining an anti-CAA protest at the iconic Jama Masjid in Delhi. The court, while releasing him on a bail bond, had noted that he would not be allowed to visit the capital for four weeks as the police has charged with stoking violence and unrest.